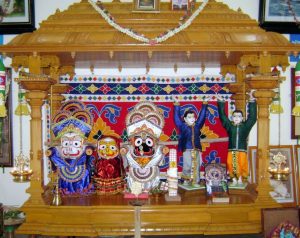 Sri Bhagavan Nama Bodendra Swami who established Nama Sidhanta entered into ‘jiva samadhi’ at Govindapuram. Here, a hall named ‘Chaitanya Kuteeram’ (named after Chaitanya Mahaprabhu who ate, drank, breathed the Mahamantra and became Mahamantra Himself) was established by Sri Swamiji in September 2007. Here the main deities are Jagannatha-Subhadra-Balarama as in Puri kshetra, along with the forms of Sri Chaitanya Mahaprabhu and Sri Nithyananda.

It was inaugurated by Sri Sri Krishna Premi Maharaj. Incessant chant of the Mahamantra happens here from 6 am to 6 pm daily.

Ratha Yatra during the month of Ashada (June/July) and a week-long Utsav in September commemorating Chaitanya Kuteeram’s anniversary, are among the special annual celebrations.