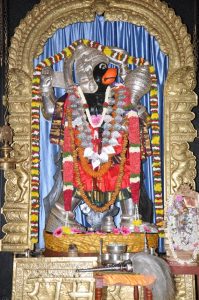 When a devotee first offered this plot of land in the outskirts of Bengaluru at Kalkere, Ramamurthi Nagar to Sri Swamiji, he initially had the idea of building a temple for Panduranga. However, one day when Sri Swamiji visited the plot he saw a cloud above which was shaped exactly like Hanuman carrying the Chiranjeevi hill! Sri Swamiji then declared that the place had the saanidhyam (divine presence) of Hanuman and that a temple for Hanumanji should be built there.

In April 2008, a temple for Hanumanji with an Oriya style vimanam was consecrated in Kalkere, NRI layout, near Ramamurthi Nagar, Bengaluru. True to his looks Hanumanji here is named ‘Sundara’ (beautiful) Anjaneya. This Sundara Anjaneya also relieves people of navagraha dosham and troubles from evil spirits.

Every year, the pratishta dina (day of installation) is celebrated in which Sri Swamiji usually participates and blessed the devotees. However, one year Sri Swamiji was unable to go to Bengaluru. But he had given detailed instructions in the conduct of the celebration. He later visited the temple and asked the person in charge of the puja if all his instructions had been carried out to the last letter. Wondering why such a question had been asked by Sri Swamiji the priest said that he had indeed carried out all Sri Swamiji’s instructions. When Sri Swamiji repeatedly asked this question, as if not satisfied with the reply given, the priest felt wonderstruck and also a bit apprehensive. Sri Swamiji then explained that Sundara Anjaneya had told him that ‘jilebi’ (a special sweet) mala had not been offered to him! And, yes, they did realize that that had been missed out from the list given by Sri Swamiji. So, that day jilebis were prepared and a garland of jilebis was offered to Sundara Anjaneya.