Srimad Bhagavatam instantly touches one’s heart, as it unfolds the lives of bhagavatas, with their finest qualities like forgiveness, acceptance, gratitude, humility, steadfastness, love and so on. While the story of the jnani, Jadabharata, in the fifth Canto revels in its own 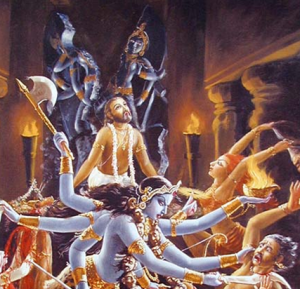 glory; his previous births form an essential prelude to the intense dispassion and equanimity that he possessed in that birth.

King Bharata, the son of Lord Rishabhadeva, was born with a taste for bhakti, which comes only to a select few by Bhagavan’s grace. After fulfilling the responsibilities of a dutiful monarch, he bequeathed his kingdom to his son and left for the forest. Though his yearning to attain Bhagavan was without a second, due to a sad twist of fate, his serene mind – which would not be lured even by the Goddess of fortune and all his kingly comforts – became attached to a baby deer; and alas, he died thinking, not about God, but the deer. In his next birth as a deer himself, having the memory of his regrettable previous birth he dissociated from his herd and exhausted his karma to be finally born anew as Jadabharata, the son of a pious brahmin.

In this birth, determined not to lose the missed opportunity one more time, Jadabharata constantly thought of Bhagavan and concealed his glorious inner self in the garb of a mute dunce. All material pursuits tasted insipid to him. He distanced himself from the dizzying whirlpool of duality: happiness – sadness, praise – insult, hunger – satiety, heat – cold, rain – shine. Having attained jnana, he viewed everything and everyone with equanimity. Wandering under the cover of dirt, he was spited by others, but how did it matter to one who truly saw all as God?

If Jadabharata was given a feast, he ate it; if he had no food, he sat just as happily in thoughts of Bhagavan. Once he was taken away by a tribe to be sacrificed to their goddess. He sat innocent and unmoved when his body  was first decorated beautifully by them and as they placed him on a throne and paid obeisance to him as a sacred “offering”; but later he sat equally unmoved when the same people came charging at him with a sword, ready to chop off his head as an offering. The fact that – although Jadabharata sat unmoved and untouched by fear – the goddess herself was angered by her worshippers’ act and retaliated against them is a different matter altogether.

The inert Jadabharata’s greatness was known to the world only when he was once asked to be King Rahugana’s palanquin-bearer, which he quietly did, acquiescing and equanimous as he always was. But when he continuously jumped to avoid hurting ants on the path which were, for him, also forms of God, he was reprimanded by the king. That is when Jadabharata opened his mouth and all his accumulated pearls of wisdom dropped out, stunning the blessed king who immediately fell at the great jnani’s feet. In his advice to the king, Jadabharata said with utmost feeling, “Bhagavan cannot be realized just by doing penance, worship, renunciation, celibacy, study, austerities, etc., if one does not smear the dust of the lotus feet of a Mahatma all over oneself!”

Bhagavan found a place in Jadabharata’s mind because for him everyone was equal and all he saw was Bhagavan. His pure mind had transcended the dual state of joy and sorrow to be in a state of constant bliss, as it was connected to the Divine.