Faith and Love Can Bring Immortality

Once upon a time their lived a pious couple named Mrikandu and Marudvati. They were very devoted to Lord Shiva. They did not have any children and sincerely prayed to the Lord for one. Lord Shiva appeared in their dream and before granting them a boon, questioned them if they wanted a child with long life but little knowledge, or a brilliant child with a short life span. The couple asked for the latter and the Lord happily granted them the boon. 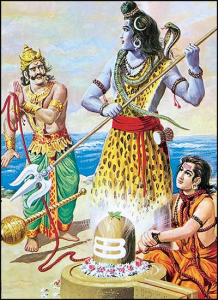 Soon they begot a child and named him Markandeya. He grew up to be a handsome and intelligent boy. He was not only intelligent, but also humble and very devoted to Lord Shiva, just like his parents. Everyone liked him. Rishi Mrikandu’s fear grew along with Markandeya. Markandeya was curious to know the reason for his parents’ constant distress, and constantly asked them for the reason. The worried and helpless father finally told him about his short life span. Hearing this, Markandeya was not worried, but reminded his father about the Lord’s compassion to His devotees and told him that he will pray to the Lord day and night and was sure that his Lord would save him.

Markandeya went to the sea shore and built a small Shiva Linga and started worshipping Him day and night. He sang and danced for the Lord. On the last day, Yama, the God of death appeared on a buffalo and threw a noose on him. Markandeya held the Shiva Linga tight, as a child would hold his mother ,and would not let go. The noose fell on him and the Linga. This act of Yama annoyed Lord Shiva, who appeared in rage and kicked Yama on his chest and said, “Yama! Get away from my devotee, never cast your eye on him. He is my beloved devotee, and he will live forever.”

Markandeya prostrated to the Lord with tears in his eyes. Lord Shiva blessed him lovingly. Markandeya then happily went home and his parents were overjoyed.

Markandeya did not forget the Lord. He continued his devotional practices, and later became a great sage. Markandeya’s strong faith and perseverance in Lord Shiva brought the Lord himself down to save him from the clutches of death.

This month we celebrate Mahashivaratri. Let us reminisce the stories of Lord Shiva’s devotees and please Him in the process.