In Bhagavad Gita, Bhagavan  reveals to Arjuna that he can let go of all his  dharma and just take refuge unto Him – “sarva dharmAn parityajya mAmekam sharaNamvraja.”

Srimad Bhagavatam goes on to illustrate this supreme secret of sharaNAgathi  (surrender) through the stories of several great devotees like Draupadi, Uttara, Prahalada, Gajendra and others. In the seventh canto of Srimad Bhagavatam, Prahlada beautifully alludes to the nine types of bhakti – shravaNam, kIrtanam, vishNosmaraNam, pAdasevanam, archanam, vandanam, dAsyam, sakhyam and finally he mentions the most beautiful characteristic of bhakti – Atma nivedanam – complete surrender to the Lotus feet of Bhagavan. 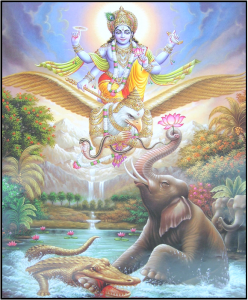 In the eighth canto, at King Parikshit’s request, Sri Shukadev describes the story of Gajendra to exemplify the elephant king’s spirit of surrender to the Supreme. Sage Shuka at first describes the abode of Gajendra — the Trikuta Mountain surrounded by the milky ocean, wrapped with lush green foliage; the breathtaking valleys teeming with fauna and the enchanting serene lake hugging the mountain slopes. There, in that beautiful setting, lived a herd of elephants led by Gajendra.

One day, thirsty for water, Gajendra, who was frolicking around with other elephants, entered the lake with them. Though his thirst was quenched, he continued to play with his play mates, absolutely unaware of the impending peril.

A crocodile that lived in the lake suddenly caught hold tightly of Gajendra’s feet. Although the mighty Gajendra fought hard to release himself from the grasp of the crocodile, he could not. The crocodile held on tight and would not let go. The other elephants tried to help him, but eventually gave up and went away.

A thousand years rolled by, but neither did the crocodile drag Gajendra completely into the waters nor was Gajendra able to free himself from the crocodile’s formidable grip.

Gajendra had hitherto led his life  believing in his own self, but at this most precarious moment of his life, he found that his family, friends, and his  own might too, had failed him! The realization then dawned on him that there must be a greater power behind these happenings. Fixing his mind on that Supreme Being, he finally submitted himself in surrender to the Lord. To surrender is to acknowledge Bhagavan and to give him control of one’s life. Then the experiences of life, however dual they may seem, just become stimuli that spur one to speedily develop dispassion and attain Him.

Gajendra then remembered the prayer he had offered to the Lord as King Indradyumna in his previous birth — the beautiful Gajendra stuti presented in Canto 8, Chapter 3 of Srimad Bhagavatam.

In this stuti, Gajendra invokes the immensely compassionate nature of Bhagavan and calls out to Him –

I bow to the Lord of immense compassion, for He who is forever free is the only One who can relieve fallen creatures like me and untie the knots of ignorance.

Gajendra transcended to the level of a beloved devotee of Bhagavan when his ego was completed erased and he surrendered entirely to the Lord’s will. He expressed his prayer for deliverance from the bondage of worldly existence, and not merely the grip of the crocodile.

Hearing Gajendra’s heartfelt hymn, the Lord descended on Garuda to meet His beloved devotee. Gajendra plucked a lovely lotus and offered it to Sri Hari and hailed Him – Narayana Akhila Guro Bhagavan Namaste!

The lotus-eyed Lord can still be seen lovingly holding the Lotus offered by His devotee, in Guruvayoor. Out of His immense compassion He pulled the elephant out and freed him from the grip of the crocodile and of samsara, bestowing on Him the eternal abode of Vaikunta.

In Bhagavatam, the Lord Himself gives the phalashruthi (fruit of reciting) of this most touching hymn—”One who chants it daily in the early hours of the morning gets My remembrance at the last moments of his life!”

A beautifully beaded story of surrender illustrated through the life of one of the most egoistic creatures – an elephant king; the lake – a mirage of happiness called the world; and a crocodile, a representation of the clutches of samsara. Of all the ways of doing bhakti, the only path an elephant can follow is to remember the Lord and to offer himself to Him, which Gajendra did. This story of ‘Gajendrazhwar’ is a wonderful reminder that when the “I” is finally offered at the Feet of Bhagavan, He stops being a witness and takes complete control of His devotee’s life.