Rathanakar was a thief who was living in the forest with his family. He used to kill animals, robbed people to earn a living.

One day, Sage Narada passed by the forest where Rathnakar was living. Sage Narada always chanted Nama. He was quite tall, his hair tied like a bun and glittering in a silk dress and was filled with Tejas. He was chanting nama in a beautiful voice. 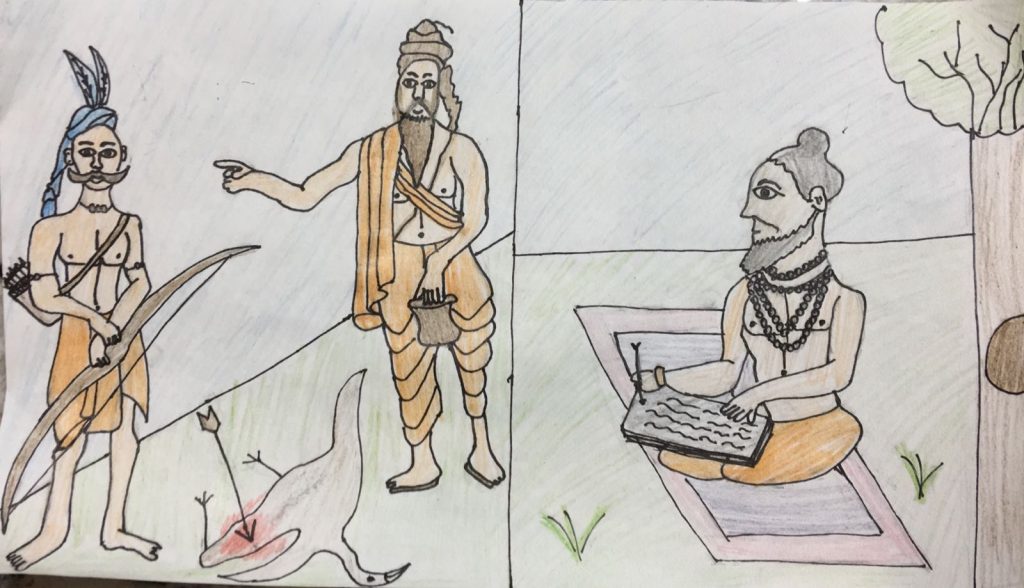 Rathnakar saw him coming and wanted to rob Sage Narada. He suddenly went and jumped in front of him and seeing him, Sage Narada laughed. Rathanakar was wondering why Sage Narada laughed at him instead of being frightened. He put a knife around Sage Narada’s neck and asked him to give all the valuables. Sage Narada told him that he only had the veena and that he did not have any money or other valuables. Rathnakar did not believe it and he didn’t want to leave Sage Narada and was staring at him.

Sage Narada  asked Rathnakar to go to his home and ask if his parents and wife would share the sins committed by him. Rathnakar tied Sage Narada to a tree and went home hurriedly. He asked his wife and parents if they would share the sins committed by him and they told him that they will not share any sins since it was his duty to take care of them.

He did as Sage Narada told him and slowly he started chanting continuously and slowly his chanting was heard in the whole forest. After some time, ants built an anthill over him and he continuously chanted Rama Nama. He came out after the anthill after many years and came to known as ‘Valmiki’-the one who came out of an anthill.