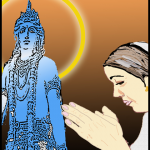 Kunti always kept her bhakti inside and never bowed down to Krishna before telling Kunti Stuti [in Srimad Bhagavatam].

Krishna bows down to Kunti and Kunti knows that Krishna is the all supreme, but raises her hand and says “aishman bavat”. Krishna wants Kunti to raise her hand, so Kunti does what He wants. A bhakta loves the Lord, so they do what He wants.