Lord Ganesha and the Fruit – by Nivedha Gopal, 5 yrs 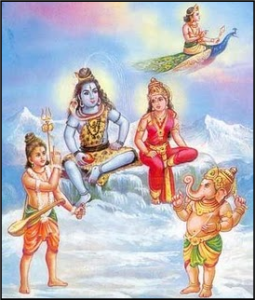 A popular Hindu story about Lord Ganesha tells the truth.
Saint Narada once handed over a mango to Shiva and Parvathi. He said that it was a special mango which would give special power to whoever eats it. Shiva and Parvathi thought of giving it to their kids. But Narada said that the mango should not be shared and had to be eaten by one person.
But both Ganesha and Karthikeya wanted the fruit. Shiva said that both of them had to go around the world three times. Whoever came first would get the fruit. As soon as they heard, Kathikeya left. He rode his peacock and left on his world tour.
On the other hand Ganesha stood there and put on his thinking hat. He looked down at his big body and his vehicle the rat.
Lord Ganesha got an idea. He circled his parents three times and asked for the fruit to be given to him.
Shiva and Parvathi asked why do you want the fruit. He replied, “Parents are my world and no other world is there apart from them.”
Then Parvathi gave the mango to Lord Ganesha.