The following article is from Ardenwood, CA Gopa Kuteeram center, on the story of  Lord Ganesha and the mango. 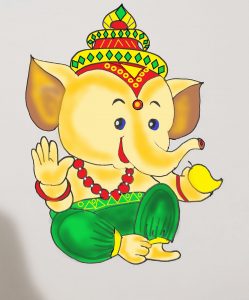 One day Ganesha and Karthikeya (Ganesha’s older brother) found a mango fruit. Being kids they were not ready to share the fruit. So, God Shiva (dad) proposed a challenge. He asked his sons to take three rounds of the world and come back. Whoever would return first would get the fruit. Karthikeya flew away on his peacock thinking he would win because he had a faster animal. But Ganesha was worried as he was a little stout and only had the little mouse as his vehicle. So he made a decision based on his wisdom and circled around his parents three times. When Shiva asked, Ganesha replied that his world lies at his parent’s feet and they are more than the world for him. Shiva was touched and impressed by Ganesha’s wisdom. He chose him as the rightful owner of the fruit.

Moral of the story.

We should respect our parents as they are the most important and dearer than the rest of the world. Also, we should not be panicked even if we have a hard situation just think another way of it and then you will solve it.