About 50 kilometers from Vrindavan is the village of Barsana, the birth place of Lord Krishna’s beloved, Sri Radha. Therefore the place itself is an important pilgrim spot for Krishna’s devotees. 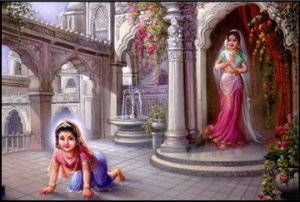 Radha was born to Barsana’s chieftain ,Vrishabanu, and his queen Kalavati after Vrishabanu chanted the Mahamantra for several years. Radha was the epitome of prema bhakti. Her love for Krishna was unparalleled. So was Krishna’s love for Radha. In Brahma Vaivartha Purana, Lord Krishna himself says that those who chant Radha’s name are very dear to Him.
Radha and Krishna used the land of Barsana for their divine plays. There is one such divine play that people of Barsana still believe and reenact every year during the Holi celebration. After Krishna steals Radha and the Gopis’ clothes, Radha and the Gopis decide to teach Krishna a lesson by hitting him with a stick. So every year, during Holi, the men of Nand gaon playing the role of Krishna enter Barsana with colors and the women of Barsana, posing as Gopis playfully hit them with sticks (lath). Hence the Holi celebration is known as Lath Mar Holi.
Sri Swamiji has composed many songs on Sri Radha Devi. In this series, we will be presenting “Pavitra Bhoomi”, a song that describes the celebration of Radha Devi’s birth in the holy land of Barsana.

Translation
Pallavi
Holy is the Land of Barsana!

Charanam
The Devas (gods) assembled, the Gandharvas (demigods) sang
Drums were played as the Kinnaras (demigods) danced
They all showered flowers and rejoiced
As the flower of love (Radha) blossomed on Earth