Last month, we enjoyed the baby steps of Lord Balarama and Lord Krishna. As they started walking, their mischief, especially stealing butter from the houses in Gokula began as well. The Gopas and Gopis enjoyed their pranks though they pretended to complain to Yashoda every now and then. 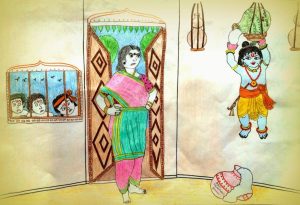 In Srimad Bhagavatam, Sri Shuka narrates these lilas of the Lord in Chapter 8 of Canto 10 through the eyes of the Gopis.

The Gopis came one after the other to complain to Yashoda. One Gopi said, “Oh Yashoda, Do you know what your little boy did today? He came and released all the calves in the cow-shed at an untimely hour. (vatsAn munchan kvachid asamaye…) They went to their mother cows and drank all the milk. Now we don’t have any milk.” To this, saints say, Krishna innocently replied, “How can they say that I release calves from bondage at an untimely hour? Have I not incarnated for that very purpose? [to release souls from the bondage of samsara!]”

Another Gopi said, “He comes and steals all the butter we have at home. But when we offer him butter, he refuses it, claiming that he does not like butter. And later when nobody is around, he steals the butter. He only likes to have stolen butter. (…steyam svAdu atti…)”

“Not only that, he devises very clever plans as he is a master at the art of stealing! (…kalpitai: steya-yogai:…)”. For this, Sri Swamiji, in a lighter vein, says that, just as Krishna preached Bhakti Yoga, Karma Yoga, Jnana Yoga, he also preached Steya Yoga (the yoga of stealing).

Another Gopi added, “I won’t even complain if he eats or shares it with his friends. But he goes and distributes it to the monkeys! (markAn bhokshyan vibhajati..) And if they refuse to eat, he declares the butter unfit to eat and breaks the pots! (sa chen nAtti bhANDam bhinnatti) At least, can’t he leave the pots intact?”

“We tried hiding the butter too. But he finds it. The other day, when he couldn’t find it, he got so irritated at all of us that he pinched my sleeping toddler. The child began to wail so loudly that I had to drop everything and run to him! (…dravyAlAbhe sagRha-kupito yAti upakroShya tokAn…)”

“And if we keep it high above his reach, as you suggested, he arranges wooden planks and mortar and climbs on top of them. (…hastAgrAhye rachayati vidhim pITakolUkhalAdyai:..). And if it still not reachable, he throws stones and makes holes in those pots! (…chidram hi antar-nihita-vayuna: …)”

“Oh Yashoda, we also tried hiding the pots in dark rooms thinking he might be afraid to go in there. But no! The beautiful shining ornaments that you decorate him with provide him the light to see in the dark room (dvAntAgAre dhRta-maNi-gaNam svAngam arta-pradIpam).”

Thus the little Krishna filled the lives of the Gopas and Gopis with merriment.

Innumerable saints have sung a number of kirtans about these navanItha chourya lilas (butter-stealing plays). Sri Oothukadu Venkatakavi, the great devotee and a blind poet from South India has composed songs like Thaaye Yashoda, Vishamakaara Kannan in the bhava of these Gopis.

Sri Narayana Thirtha, who has composed the Krishna Lila Tarangini on the lilas of the Lord Krishna, sings “Kalaya Yashode Tava Balam…”, in the bhava of the Gopis telling Yashoda about Krishna’s pranks.

Sri Swamiji too has composed several kirtans on these mischievous lilas. This month, we will enjoy his composition, Navanitha Natyam, in which Sri Swamiji brings out the Navarasas (nine emotions) of Lord Krishna as He goes about stealing butter.

Krishna is doing the ‘butter dance’
Who wants to come and play the rhythm (nattuvangam) for His dance?

If there is no butter in the pot, he is sad,
If he finds the butter, he roars thunderously and walks majestically,
Once he takes the butter in his hand, he is ecstatic,
When he hears the footsteps of the mistress of the house, he is scared,
When he generously gives it to his friends, he displays a mother’s love,
When he distributes it among monkeys, he laughs,
When he finds stale foul-smelling butter, he gets angry,
When he hides some butter secretly for Radha Devi, it is His love,
After doing all this mischief, he sits peacefully in front of Yashoda Mata!