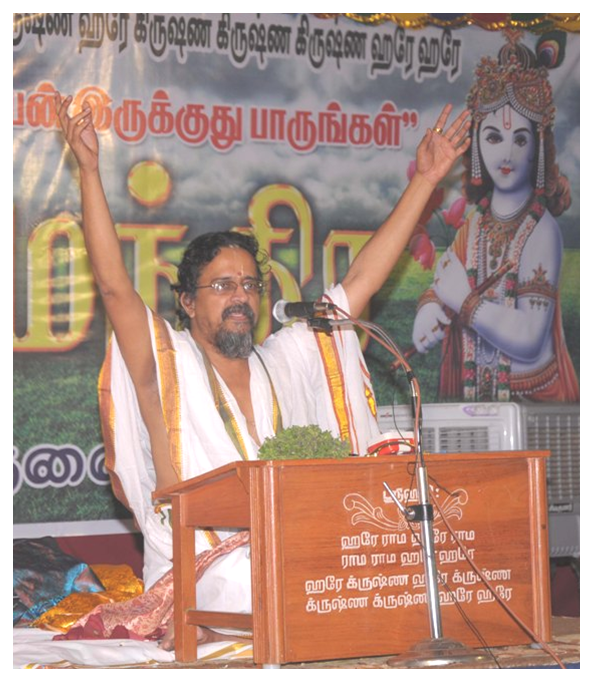 The holy land of Bharat is home to a multitude of great scriptures ranging from the Upanishads, the Puranas, Itihasas to the divine pasurams of Azhwars and the thevarams of the Nayanmars. One life is not sufficient to thoroughly learn and understand the meaning of even one of these scriptures, let alone all of them.

In ancient times, Bharat led the world in all fields, be it law, economy, astronomy, science, mathematics or all the art forms, primarily due to the spiritual strength of its citizens. The downfall of this great nation is solely due to the fact that we slowly let go of our spirituality.

This said, great saints such as Sri Rama Tirtha, Sri Aurobindo and Yogi Ramsuratkumar have predicted that “Rama Rajya” is not too far.

What is this Rama Rajya? The day when everyone starts chanting the divine names of the Lord is verily Rama Rajya! The inherent divine power within us will be strengthened and the glorious days of yore will become a reality only then.

An incident in the life of a mahatma reveals the wonders that Mahamantra can accomplish even if chanted without faith. Sant Surdas was blind, and when he was a young boy, he used to beg around for food and spend the rest of the day in the forest chanting the Mahamantra, just to bide time. One day, the king of the region found that two of his finest horses had run away from the stables. Two guards went in search of the horses in sheer panic, knowing that they would be hanged if the horses were not found by the evening. In the forest they found Surdas chanting the Mahamantra in his sweet voice. Thinking him to be a saint, the two guards requested him to tell them the location of the horses. At first, Surdas told them the truth, that he was just a blind beggar. But upon insistence from the guards and to avoid trouble, Surdas cooked up a story about a lake in the westerly direction. He said that atop a tree near the lake would be a crow and the horses would be found in the direction in which the crow cawed. Once the guards left, Surdas ran to a more secluded place and hid himself.

The next day the king himself came in search of Surdas with his retinue and eventually found him. Surdas was now scared to his wits’ end thinking about his imminent death. To his utter surprise, he realized that the horses had been found by the guards at the same location mentioned by him. The king thanked him profusely and honored him. Though Surdas had chanted the Mahamantra without any faith, that alone was enough to bring the king to his feet. This incident made Surdas realize the greatness of the Mahamantra.

Miracles happened in the life of Padmanabhan who was a devotee in the satsang of Sant Kabirdas. Once he requested a person with a severe skin disease to chant the Mahamantra. Instead, the sufferer only grumbled about his fate and never chanted. Padmanabhan, being a bhagavata (devotee of the highest order) and an embodiment of compassion, made the person sit in front of him every day for 2 hours as he himself prayed and chanted for him. Soon the man was cured of his disease and became very handsome. Padmanabhan’s fame as a remover of people’s maladies spread far and wide. He conducted mass prayers with the Mahamantra regularly in his village and cured all their diseases.

A thousand experiences can be provided to highlight the glory of the Mahamantra. Recently, a raging fire started destroying a paper mills in Pondicherry in the middle of the night. One of the two employees present there had staunch faith in the Mahamantra and started praying looking at the night sky. Immediately, from out of nowhere, dark clouds gathered and rain started pouring. Soon the fire was doused and the factory was saved from utter destruction. In another incident, a bank officer carrying valuables of the bank to another branch was robbed at gun point in a desolate and dark place. With no other support but the Name of the Lord, he cried out to God for help. The thieves came back within an hour, fell at his feet and gave back all the valuables. Such incidents highlight the fact that the Mahamantra, when chanted with staunch faith, brings immediate results.

Every prayer of ours will be fulfilled by chanting the Mahamantra – Hare Rama Hare Rama Rama Rama Hare Hare, Hare Krishna Hare Krishna Krishna Krishna Hare Hare. This prayer will bless people seeking marriage, parents seeking to beget a child, youth seeking jobs, rains will be in abundance for the farmers, the country’s economy will flourish, diseases will vanish, and peace will prevail.

With the divine blessings of Lord Sri Krishna and our Guru Maharaj, HH Sri Sri Muralidhara Swamiji, may this New Year be filled with abundance of Nama and satsangs in our lives.