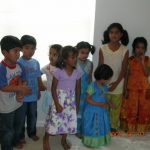 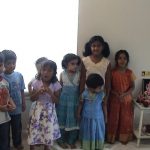 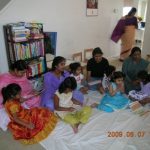 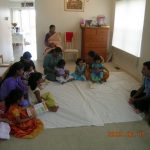 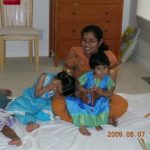 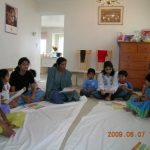 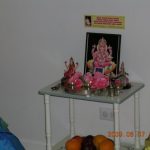 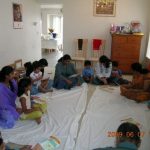 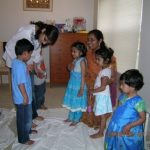 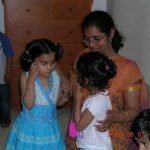 Gopa Kuteeram – 3 was held at the residence of Sarithaji in Chicago on June 7th – Sunday at 3.30 pm.

In the beginning, all the  kids, including parents – chanted – Maha Mantra for 11 times.
Before starting Gopa Kuteeram – 3 , kids were asked to chant the sloka they learnt from last program.

Then Zivanji taught the kids to chant the sloka for this session – ‘Sarvagne sarva vardey…’ and explained the sloka’s meaning.
After the sloka, we all sang a bhajan led by Zeevanji.

It was Savithaji’s turn to teach the kids about Goddess Lakshmi, and also the story about the king and Ashta Lakshmis. Some questions were asked to the kids too.

When it was suggested that the kids perform a role-play of the story, they were excited and so were the parents! A few of the parents took the kids aside and practiced the story for role playing. Given their age and the short time, they did really well with some prompting and received applause.

Then was the time for play. This time, the theme was to make each kid pray to the God, observer the Gods present and choose to offer either a flower or fruit. After the first kid’s turn, all other kids were eagerly waiting for their turn and learnt how to offer fruit/flowers to god. Kids really enjoyed this part as they were driving the show.

Towards the end, the  kids were asked to note down sloka for repeating it in the next gathering. All the kids happily agreed. The program closed with Mahamantra chanting for 11 times, Harthi and Prasad.

All the newcomers were showed interest to participate in Gopa Kuteeram next time.