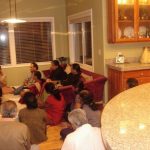 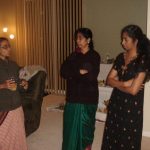 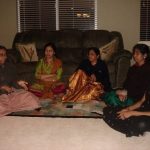 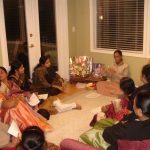 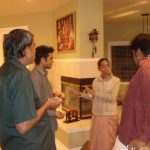 The Satsangs in Seattle started on 07 October 2008, on the occasion of Navrathri and lasted through 12 October 2008.  Poornimaji’s visit coincided with the ‘anniversary’ of the Seattle Namadwaar group which was started soon after Ramanujamji and Poornimaji’s  trip during Oct 2007. What started as a (less than) handful of devotees with a heart-full of desire to do Namakirtan, has grown to the current proportion where around 30 members participate and relish the sweetness of satsang and the divine name.  The details are as follows:

07 October 2008:  Satsang at Smt Priya and Sri Murali’s residence.
Starting with the Mahamantra, there was a chorus of Ambal Slokams on the occasion of Navarathri including Lalitha Navarathna Maalai, Mahalakshmi Ashtothram and Lakshmi Ashtakam.  The kids then chanted Ambal Slokams (Aigiri Nandini, Sarva Mangala Maangalye) and narrated a story about Mahishasuran and Vijayadashami in the Bala Gurukulam segment.  Poornimaji then explained the greatness of Satsang which was very well received and many questions about Hinduism in the present context ensued.  The satsang concluded with bhajans composed by Sri Sri Swamiji that highlighted the greatness of Mahamantra (Kaliyayum Bali Kollum).

09 October 2008: At Microsoft, Redmond campus:  A workshop on ‘Facing Challenges in the Corporate Environment’ was conducted at Microsoft.  This session was attended by Sri Sri Swamini’s devotees as well as Microsoft Employees. Poornimaji’s points about controlling one’s and mind was very permeating and increased self awareness.  The session was filled with lots of interactions and questions to which Poornimaji explained very effectively.  Some attendees also expressed interest in a follow-up discussion.

12 October 2008:  Satsang at Smt.Hema & Sri Venu’s residence:  This satsang which was based on the theme ‘Guru’, started off with the Mahamantra followed by Thodakashtakam.  The children then recited Guru-based slokas (Guru Brahma, Kalaye Sundaraakaaram, Guruve Sarvalokanam). Nrithiji and Advaithji sang one of Sri Sri Swamiji’s kirtans namely ‘Brindavaname Un Maname’, which everyone repeated.  Poornimaji then gave a discourse on ‘Guru Mahima’ or the greatness of Guru in which she stressed on the importance of Guru in achieving the ultimate spiritual goal.  Gurunathan Vaazhi and Vaasudeva Vaasudeva were the kirtans of choice for this satsang.  The satsang concluded with Kaliyai Bali Kollum kirtan along with the chanting of Mahamantra.

Evening of 12 October 2008:  Satsang at Hindu Temple & Cultural Center, Bothell:
Poornimaji gave a enlightening discourse on ‘Bhaktha Vijayam’ that caught the listeners in rapt attention. Her speech  was so impressive that Bothell Temple agreed to host Poornimaji once again for a full evening during Poornimaji’s next visit to Seattle!Like all good things, Poornimaji’s much awaited trip to Seattle came to an end with this program.