‘Pearls from Ramayana’- A 4-day Discourse Series in Redding,CA

Sri Poornimaji started off the 4 day satsangs in Redding, California with a beautiful exposition on Sabari Moksham and highlighted the power of Satsang and Nama on Friday, December 9th 2017 from 7pm to 9pm at the residence of Dr.Ravi and Smt.Jyotsna.
Sri Poornimaji continued Ramayana on Saturday, December 9th 2017 from 7pm to 9pm at the residence of Dr.Ravindran and Smt.Kousalya and expounded on Kishkindha Kandam – the meeting of Lord Rama and Anjaneya Swami, the greatness of Guru – how Sugriva who had nothing gained everything because of his association with Anjaneya Swami which in turn led to his friendship with Lord Rama himself and eventually the search for Sita Mata. The satsang was concluded at the point where Anjaneya Swami was getting ready to fly to Lanka. About 30 people attended the satsang.
Sri Poornimaji beautifully explained the qualities of Hanuman as she narrated Sundara Kandam on Sunday, December 10th 2017 at the residence of Dr.Sriram Sambasivan and Smt.Nithya Sriram. The discourse was laced with humor and was enjoyed by both kids and adults. About 35 people attended the satsang.
Sri Poornimaji concluded the beautiful discourse series on Ramayana with Vibhishana Sharanagathi on Thursday, December 14th 2017. She explained what a true surrender is and how it should be done. Once again, she highlighted the power of Nama and the need for Guru and concluded the satsang with a request to everybody to chant Nama whenever possible especially if one had a prayer in mind. Close to 50 members attended the satsangs. 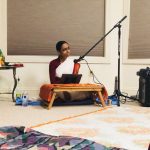 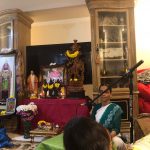 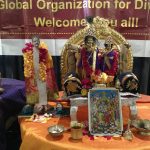 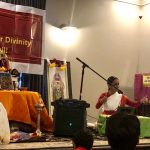 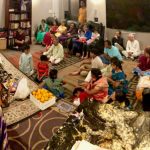 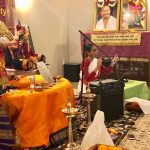