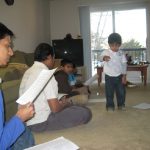 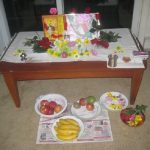 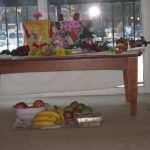 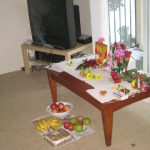 A 10 min mahamantra kirtan marked the beginning of satsang. The devotees then chanted the Vishnu Sahasranama.  Smt Ranjaniji and Smt Nithyaji then lead the group for a few of Sri Sri Swamiji’s kirtans namely

This was followed by Sri Narayananjis inspiring speech glorifying Sanathana Dharma. He narrated how Sanathana Dharma was the most scientific dharma and how the dharma emphasizes God Realization as the goal of human life. Just there are be 4 different stair ways to reach a temple pond, so also there are different ways to attain the Supreme Being and Sanathana Dharma lays out the paths too. Thus by treading on these paths, our ancestors have successfully realized God. Hence God realization is well within reach. But the path they followed is subjected to time. In kali yuga, people have a dull mind/ intellect to realize God. They have neither time nor interest to realize God. Hence, the path that our ancestors followed, like yagnam, dhyanam, yoga and pooja not suitable for us in kali yuga. Narayananji re-iterated the Kali Santarana Upanishad verse that said that Namakirtan is the only way to attain God in kali Yuga and also emphasized on the Mahamantra as said in Kali Santarana Upanishad, as the best mantra to attain God.