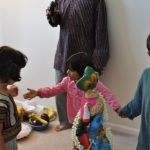 The 2 day event of Radha Kalyanam was in accordance with the Bhagawata sampradaya and started off at Sri Sankar’s residence on Saturday, 23 May 2009 at 6:20am with the Prabodhanam or the waking of the Lord.  In Sri Swamiji’s words, any event that starts and ends with the Mahamantra kirtan is sure to have the saanidhya of the Lord. Hence the next event was an Akhanda Mahamantra kirtan that started at 6:35am and went on up to 3:30pm ending with Sri Swamiji’s  Kaliyayum Bali Kollum song. This was followed the rendering of a  few Bhajans and Guru Kirtans namely:

The devotees enthusiastically headed to chant the Mahamantra in the auspicious premises of Lord Balaji at Fremont temple. Dolotsavam was performed after their return when the Lord retired to bed.

The events on the second day started off with Prabodhanam at 7:30am. Smt Kanchana Shankaran enthusiastically rendered the Ashtapadi bhajans in the traditional style bringing back the memories of Janmashtami utsav at Madhurapuri ashram. The devotees had planned to have a short Divya-Nama Sankirtan which turned out to be a longer session as the Nama brought in more energy levels. The wedding of the divine couple was performed and then the fully packed hall of the GOD Satsang at San Jose reverberated with the song “Mathura Nayaka”

Every one starting from the kids up to Lord Sri Premika Varadan and Madhuri Sakhi enjoyed the 2 day event that was a feast to the heart and soul. Devotees who came from in and around San Jose as also from Northern Califronia few hundreds of miles away ended their ‘Memorable Days weekend’ carrying the sweet memories of the event and are eagerly awaiting the next satsang.

2 Responses to "Radha Kalyana Utsav in the Bay Area"