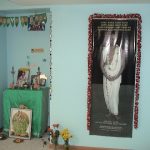 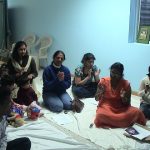 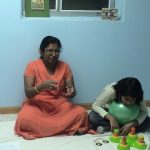 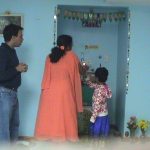 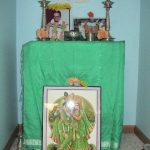 In Sri Sri Swamijis words, a satsang is complete only if it starts and ends with Mahamantra. This satsang in Aurora started with Mahamantra kirtan. One of Sri Sri Swamiji’s devotees named Vinod joined the satsang.  Mahamantra kirtan was then followed by numerous kirtans on Sri Sri Swamiji and on Lord Krishna lead by Sri Vinodji.  This was followed by a discourse that emphasized the importance of satsang or the company of realized souls (Mahans). Giving examples of how Bhagawan Ramana Maharishi bestowed Moksha to not only human but also animals like cow Lakshmi, dog Jackie, and crow and how Sri Shridi Baba liberated a sheep, the compassion of Mahans was brought to limelight.

Two wolves regularly attended the satsangs of Swami Sivananda in the banks of Ganges. Swami Sivananda explained that the two wolves had done a lot of japa (a sadhana) in their previous births. Because of a few of their bad habits and vasanas, they were born as wolf in that birth. It was their sadhana and vasanas that made them attend satsangs in that birth and it is the extreme compassion of the Mahans that they are able to liberate all souls irrespective of any distinction. The satsang concluded with Mahamantra kirtan. About 8 adults and 6 children attended the satsang. Dolotsavam was performed by Sri Vinodji later that night.