Sri Padhuka Pravesham is the coming of Guru’s Padhukas (Sri Swamiji’s Holy Padhuka’s) into one’s new home. By Sri Swamiji’s grace, Sri Zivanji and Smt.Yaminiji were blessed to have Nama Pravesham along with Sri Swamiji’s Holy Padhukas and the Lordship in their new home amidst the Mahamantra chant by devotees on March 12th 2017. The celebration started at around 8.30 AM.
Narayanan ji from Boston graciously accepted to come and brought Sri Swamiji’s Holy Padhukas along and Mayakoothan ji brought Sri Madhuri Sakhi Sameta Premika Varadhan home. The divine couple and Sri Padhukas were invited inside the new home by taking Harathi. The floor was decorated with beautiful Krishnar padams and kolams in and around the house. The holy padhukas and the divine couple were seated in their asanas.
Pooja was performed to the holy Padhukas and the divine couple by Narayanan ji and Zivan ji. This was followed by Srimad Bhagavata parayanam of Krishna Jananam, Nandotsavam was celebrated along with divyanamam by little girls dancing around baby Krishna, Abhishekam was performed to the divine couple, Srimad Bhagavata parayanam of Govindapattabhishekam was done, a variety of foods were fondly offered to Bhagavan on a banana leaf – in the shape of Little Krishna holding the hill on His little finger. This was followed by Narayanan ji beautiful pravachan on the greatness of Govardhan lila and how Sri Sathguru’s grace protects us and leads us in the path of Bhagavata dharma.
It being the auspicious day of Sri Mahaprabhu’s Jayanthi, Mahamantra was chanted throughout the day and Holi – Festival of colors was celebrated thoroughly starting from amongst the divine couple to everyone that were present.
Beautiful compositions of Sri Swamiji’s was sung by the kids and adults throughout. Sri Hanumath pooja was performed in the midst of the chant of Hanuman Chalisa. Betel leaf mala and vada mala were offered to Hanuman ji with all gratitude. Around 70 people joined the celebration. Vishnu Sahasranamam was recited from 6 to 6:30 PM and the event came to a close with Nama chanting. 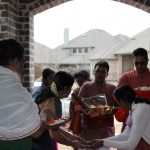 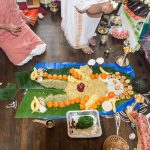 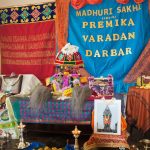 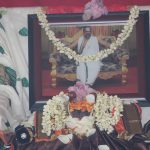 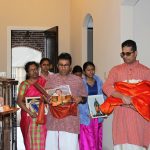 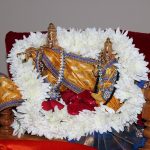 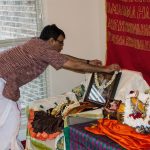 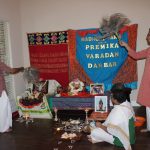 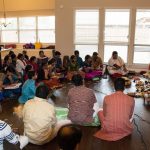 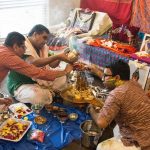 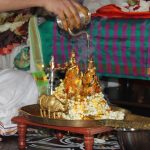 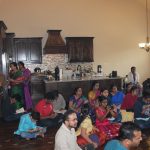