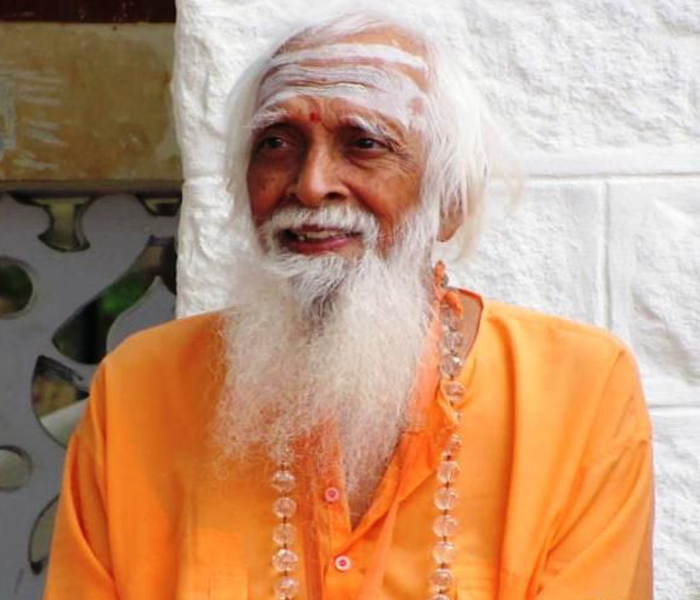 Swami Shantanandapuri Maharaj, a great saint, attained Mahasamadhi on October 14, 2014. He was a disciple of Swami Purushottamananda Maharaj of Vasishta Guha, who in turn was a disciple of Swami Brahmananda, the great direct disciple of Sri Ramakrishna Paramahamsa.
Sri Shantanandapuri Swamiji had great regard for our Guru Maharaj, Sri Sri Muralidhara Swamiji and our Guru Maharaj for him. They have met each other many times.
Shantanandapuri Swamiji spent a lot of time at Sri Ramanasramam in Tiruvannamalai. His mortal frame has been laid to rest not far from Sri Ramanasramam, in the outskirts of Tiruvannamalai.
Swamiji has written several books and articles that have been published by his devotees over the years. Here is an extract from the preface to his popular book on Srimad Bhagavatam, where he speaks of his own sadhana and Srimad Bhagavatam’s greatness.

Srimad Bhagavatam: Its Message for the Modern Man

(An extract from the preface)

I was led to my Gurudev in a Himalayan Cave in 1957 by a stranger who was my travelling companion in a bus. My Gurudev, to my delight, was a grand disciple of Sri Ramakrishna Paramahamsa and resembled the latter in many respects. In my very first meeting, I was ordered by my Gurudev to do Bhagavata Saptaham (reading and discoursing on Bhagavatam, a book unknown to me till then), for seven days at the time of his birthday celebrations in his cave Ashram. Oh! What a legacy of a priceless treasure my Gurudev gave me for my sadhana, in the form of Srimad Bhagavatam!
The Grace of the Lord flows perennially. It was that only which started me on the path in 1950 even though I had remained unaware of either God or His grace earlier. I was on my own. The entire sadhana was an uphill task, or rather it looked so. There were ups and downs in my sadhana. And even after coming under the refuge of my Guru, for years in between when I was abroad mainly, I forgot prayers, meditation, my Guru and the Lord. But the Lord and my Gurudev never forgot me. Again in surprisingly unexpected ways, they brought me back to active sadhana. The Lord ever remains behind the child who starts walking on this path on its own, but the child is unaware of it. He ever remains alert to catch the stumbling child.
Through all this period, I never parted  company with reading Bhagavatam at home. I look upon Bhagavatam as Lord Krishna himself and Krishna is the Supreme formless Brahman, my very Self.
It is Srimad Bhagavatam (given to me by my Guru) that made me grow from a crass donkey to an Arab Stallion. It led me smoothly to the state of formal sanyasa (monkhood). It made me desireless, free from attachment and ego and I matured into the mental stage of a Sanyasin long before I donned the ochre robe formally after initiation.
The grace of the Lord is always with us, but it is our own efforts (purushartha) under the watchful, encouraging and benign eye of the Lord, that takes us to an advanced spiritual state. In the ultimate state again, it is the gravitational pull of the Lord’s grace that catapults us into the final God realization and consequent liberation. The Lord rushes to the rescue of an aspirant at the appropriate time and smoothens the way by relieving him of all worldly burdens.