Swami Vivekananda’s Love for His Mother

All Mahans – great yogis, jnanis and bhaktas who renounced the whole world for spiritual prowess, for Self-Knowledge, for the sake of their Lord – have nevertheless had a soft corner for their mothers.

Sri Adi Shankara, the great Jnani and proponent of Advaita, came back to his mother at the time of her death and shed profuse tears of grief at her passing! Sri Ramana Maharshi, the great sage who had no possessions, maintained no relationships and was beyond the four ashramas, had a special relationship with his mother who lived with him in her later years, and eventually became a ‘mother’ to all his devotees and disciples too. 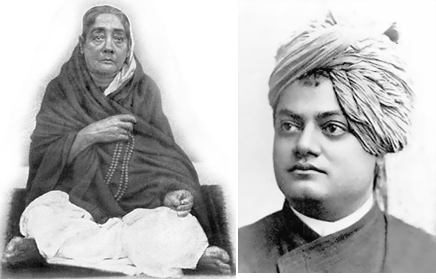 Likewise, Swami Vivekananda too had a special relationship with his mother. Swami Vivekananda’s mother, Bhuvaneshwari Devi was a strong, pious woman who had to face numerous struggles in her life: After the death of her husband, when her oldest son Naren (Swami Vivekananda) was barely 20, she was cheated of her rightful property by relatives. One who was accustomed to opulence and comfortable living was now forced, along with her children, to move out of her house and live with her mother in what Swamiji later called “a hovel”. She was financially in very poor condition, and continued to struggle with the court case and property dispute for her rightful home for a large part of her life. Not long after her husband’s passing, Bhuvaneshwari Devi had to reluctantly let go of her eldest and favorite son, Naren, who left his home to pursue spiritual sadhana and take care of his ailing Master, Sri Ramakrishna, and later renouncing the world, took up sanyasa.  Years later, Bhuvaneshwari  Devi also had to undergo terrible grief through her daughter’s suicide and later see her great son, Swami Vivekananda, leave his mortal coil much before her own time.

Yet through all this, Bhuvaneshwari Devi remained patient and calm, and maintained her dignity, strength, piety and righteousness, while performing her duties with a steady mind.

Swami Vivekananda was deeply devoted to his mother throughout his life. Even though he had renounced the world and was spending all his time in Sri Ramakrishna’s work, he grieved at the thought of his mother’s condition. Swamiji once wrote in a letter to a friend, “…If there is any being I love in the whole world, it is my mother.“

Whenever Swamiji was in Calcutta, he would often visit his mother, and she too would go to see him.

In 1900, two years before he passed away, Swamiji wrote in a letter from America, “As for my mother, I am going back to her – for my last days and hers……All my life I have been a torture to my poor mother. Her whole life has been one of continuous misery. If it be possible, my last attempt should be to make her a little happy. I have planned it all out.”

Swamiji glorified his mother’s character with these words: “…the love which my mother gave to me has made me what I am and I owe a debt to her that I can never repay……I know that before I was born, my mother would fast and pray and do hundreds of things which I could not do for five minutes even. She did that for two years. I believe whatever religious culture I have I owe to that……Whatever little good impulse I have was given to me by my mother, and consciously, not unconsciously.”

Swamiji never tired of extolling the virtues of motherhood and of his mother. In a lecture in Pasadena, CA in 1900 he said: “From motherhood comes tremendous responsibility……Why should mother be worshipped? Because she made herself pure; she underwent harsh penances sometimes to keep herself as pure as purity can be….. My father and mother fasted and prayed for years and years, so that I would be born…. She was a saint to bring me into the world; she kept her body pure, her food pure, her clothes pure, her imagination pure, for years, because I would be born. Because she did that, she deserves worship.”

What better way to glorify the “Mother” on Mother’s Day than to reminisce Swami Vivekananda’s love for his own mother, on the occasion of his 150th birth year celebrations?

9 Responses to "Swami Vivekananda’s Love for His Mother"