The Mother’s Face and Her Grace

Abhirami Bhattar was the name given to Subramaniya Iyer by the Maratha King Saraboji about 300 years ago. Do you know how he earned such a name? 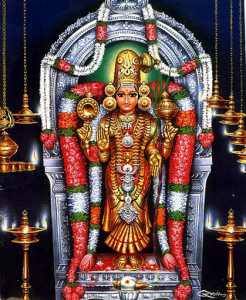 Subramaniya was born to a pious couple in a small village called Thirukadaiyur in southern Indian state of  Tamilnadu. Lord Shiva as Amritha Ghateswarar, and his consort goddess Abhirami are the presiding deities of the town’s main temple. Even as a child, Subramaniya developed great devotion to goddess Abhirami.

With time, his devotion grew to such an extent that people misunderstood him to be a madman. He was often found meditating for long hours in the temple or lost in his own divine world. While in such a state he showered flowers on the women who came near him, looking upon them as the goddess Herself.

One day Raja Saraboji, the Maratha king of Thanjayur visited the temple to pay homage to the Lord. He then noticed the peculiar behavior of Subramaniya and questioned the other temple priests about him. The ones who were jealous of him remarked that he was a madman, while others rejected this categorization and explained to the King that he was an ardent devote of goddess Abhirami. The King decided to find the truth by himself. He approached Surbamaniya and asked him what day of the month it was, i.e. if it was new moon day or full moon day. Subramaniya, who saw only the radiant face of the goddess everywhere, even in the sky, then wrongly answered that it was a full moon day.

The king, who was upset, declared that Subramaniya would be beheaded if the moon did not appear by that night. Subramaniya later realized his mistake. He lit a fire under a wooden plank that was held by 100 ropes and sat on it. He began to compose and sing the Abhirami Andhadhi – 101 hymns in praise of Goddess Abhirami. After every hymn he cut one rope. When he sang the 79th hymn, goddess Abhirami was pleased and rushed to save Her bhaktha, who always saw Her and only Her in everything around him. The mother who appeared before him, threw one of her earrings in the air which took the form of the full moon and made the night sky radiant. With all ecstasy Subramaniya composed another 22 verses in Her praise.

The king was astonished by the great devotion of Subramaniya and fell at his feet. He then honored him by naming him “Abhirami Bhattar”, meaning a staunch devotee of goddess Abhirami.