Unparalleled Love of the Gopis!

This is the concluding part of the 10-part series, “Learnings from Srimad Bhagavatam” that was published in this newsletter over the last year. 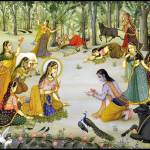 Love is the one element in the world that always brings happiness and peace; that always brings people together; that can always melt even the hardest of hearts and the cruelest of minds; and which is the one weapon and remedy against all the evils of the world.
It is no surprise then that the essence of the most beautiful scripture in the world – Srimad Bhagavatam – is nothing but Love.
All through Bhagavatam, in its different stories, we constantly encounter love in its various forms – of a king for his subjects, of the people for their ruler, of a person for his/her clan and family, of a warrior for his nation, of a wife for her husband, of a mother/father for her/his child, the love of a devotee for God and of God for His devotee.
And among all these forms of love spoken of in Bhagavatam, stands the shining crown jewel of the highest love there can ever be – the utterly selfless, desire-free love of the Gopis for Bhagavan Sri Krishna.
Sri Krishna avatar is not only the sweetest and most beautiful of all of Bhagavan’s avatars but also the most benevolent, compassionate, generous and softest avatar. It is almost as if His heart melted the moment someone simply went up to Him. Instantly He granted whatever was asked of Him and sometimes, gave even more than what was asked! He gave moksha to even His adversaries; He was an emissary and a charioteer of the Pandavas and got them their kingdom; He gave protection, strength and prosperity to the Yadavas; He gave Sudama untold wealth; He even visited Kubja and granted her prayers.
What then to say of the Gopis of Brindavan, who desired nothing from Krishna but desired only Krishna Himself? He did give Himself to them, but in return for their selflessness, He also rewarded them with the best thing that He can ever give – completely pure love for Himself, untainted by any kind of desire.
The Gopis sacrificed their beloved Krishna for the sake of the world; but their love for Him remained forever with them, thus ensuring His constant presence in their hearts.
It must indeed be because of this all-encompassing love of the Gopis, that everything and everyone in Brindavan developed the highest love for Krishna. The cows, animals, birds, trees, creepers, rivers and streams of Brindavan; the mountain Govardhana; the fruit sellers of Brindavan; the Yagna-patnis (wives of priests who were performing sacrifices in the forests near Brindavan); even the wives of the venomous Kaliya!
The Yagna-patnis left their families and duties in an instant to have darshan of Sri Krishna, for whom they were filled with love simply through listening about His appearance and exploits from the Gopis.
The wives of Kaliya revealed their beautiful, hidden devotion to Sri Krishna in their wonderful stuti (praise), where they say they do not desire the highest realm, the riches of the world, a position of power, yoga siddhis or even mukti, but they desire only the dust of the Lotus Feet of Sri Krishna. How could these poisonous snakes have developed such pure, untainted devotion to Bhagavan except by listening constantly to His glories raining from the sweet, love-filled lips of the great Gopis?
More than the presence of Sri Krishna, it is because of the presence of these exalted Gopis that Brindavan is the holiest of all holy places. Krishna’s intimate friend Uddhava – when he visited Brindavan – was himself moved so intensely by the love of these Gopis for his Lord that he rolled in the dust of the feet – not of Sri Krishna – but of Sri Radha and the Gopis!
The Rasa panchadhyayi (five chapters describing Rasa leela) in the heart of Srimad Bhagavatam’s 10th Canto are the essence of Bhagavan’s grace on the Gopis. The great mahatma Kanchi Mahaperiyava shed tears when he heard about somebody’s ignorant comment that Bhagavatam would have been a great scripture if only the Rasa leela was not there, and replied that it was only because he himself had done parayanam (recited) of the Rasa panchadhyayi numerous times in his previous births that he had now obtained the life of a sanyasi!
Such is the greatness of the Gopis! Such is the greatness of Bhagavan Sri Krishna! Such is the greatness of Srimad Bhagavatam! And this great Srimad Bhagavatam has now dropped onto the laps of us, mere ignorant mortals. Such is the greatness of the mahatmas who constantly expound the nectar of this great scripture!