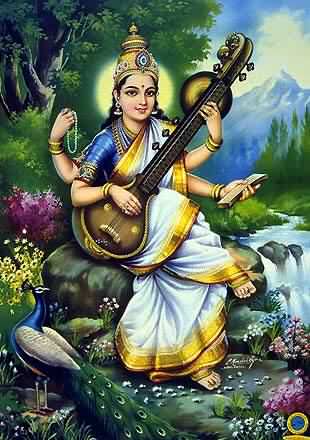 Navaratri is an important Hindu festival celebrated by Indians all over the world. Over a period of nine nights, the festival marks the celebration of Durga, the Goddess of Power. It usually falls during the months of September or October. During these nine nights and ten days, nine forms of “Durga/Shakti” and other forms of the Mother Goddess, including Lakshmi and Saraswati are worshiped. The tenth day is called “Vijayadasami” (popularly known as Dussehra), literally meaning “The Tenth Day of Victory.”

Vijayadasami is the day when the victory of good over the evil is cherished, after nine days of worship. Vijayadasami is celebrated on the tenth day invoking the blessings of  the Goddess of Knowledge, Saraswati.

According to the Hindu scriptures and belief, Vijayadasami makes a very auspicious beginning to all forms of learning as it is dedicated to Goddess Saraswati, the source of all knowledge. Children begin their new academic year or a fresh term and many people start learning a new art on this day. This is because any new learning commenced on this day is said to grow and bring us excellence in it.

It is also a customary practice to bow before our guru on Vijayadasami for the very same reason. It increases the gratitude or devotion that we have towards our teachers (Gurus).

People also place their books before the picture of Goddess Saraswati for worship. Also, the Hindu epics have it that the tenth day of Navratri is celebrated to mark the victory of Sri Rama over Ravana. This shows us that knowledge and victory are to be revered and cherished.

Let us therefore seek the blessings of the Divine Mother to bless us with knowledge and victory.