Youth Contribution – Awe is Love with Respect for the Guru

This article is based on an excerpt from Sri Swamiji’s Ramayanam series where he talks of his experiences with Maha Periyava. 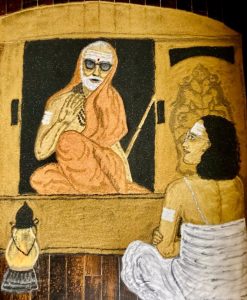 As part of the Ramayana Series by Sri Swamiji, he shared a beautiful incident about the conversation during the meeting of Sage Shatananda and Sage Vishwamitra. Sage Shatananda inquired about his mother, Ahalya, and became extremely happy hearing that she reached the abode of his father. He felt immense gratitude to Lord Sri Rama, and also to Sage Vishwamitra who made that meeting happen.

Sri Swamiji said the one thing that gives disciples immense joy is hearing the glories, mahima of their Guru. So Sage Shatananda starts to narrate the stories of Sage Vishwamitra to Lord Sri Rama and Lakshmana.

Similarly, in the discourse, Sri Swamiji also shared several special incidents from Sri Maha Periyava’s life where he celebrated the greatness of his Guru.

One such incident happened when Maha Periyava was in Kalavai, and the Aradhana of his Guru was taking place. When it was happening, Maha Periyava in the spur of a moment, unaware of himself, took the padukas of the Periyava in Kalavai. He placed the padukas on his head and started chanting, “sathguro pAhimAm paramadayALo rakshamAm, sathguro pAhimAm paramadayALo rakshamAm” and even seemed like he was doing a light dance in extreme joy and ecstasy. Sri Swamiji said this act of Maha Periyava was just like us doing divyanamam chanting and pradakshinam singing, “Krishna, Rama, Govinda” and performing Theertha Narayana Puja.

Sri Swamiji shared that Maha Periyava did not get to spend any time with either of his Gurus, his Pratyaksha guru, or Parama Guru. Even then, during the times of Guru Aradhana, we see Maha Periyava engrossed in thoughts of his Gurus. He used to ensure the vedic pandits who came to perform the aradhana were served food on a “pethi elai”, (a specific type of leaf that is stitched into plates using twigs, and used to serve food in India). It is said that serving on a “pethi elai” is equal to serving on a golden plate. Sri Swamiji said that several disciples (including Sri Swamiji) used to go and pick these leaves and sew them together to serve food for the pandits.

Sri Swamiji said 15-20 days before the Guru Aradhana, Maha Periyava would be in deep dhyanam of his guru. Just mere thoughts of his Gurus, even though he had not met them in person, made him shiver with joy. Sri Swamiji said the best way to describe this is using the English word “Awe”. The meaning of this word is described as “love with respect.”

This episode taught us all how Guru Padukas are indeed the form of the Guru Himself, and how to do dhyana of Guru in awe!