Cherished Memoirs 73 – A Peek into the Greatness of a Mahan

Through the eyes of one of His foremost, early disciples, Smt. Jayanthi Janakiraman 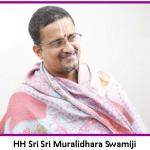 Monday, May 6, 1991. This was a very holy day. It turned out to be the most sacred day of my life. I used to read Sri Kanchi Acharya’s “Deivathin Kural” book very eagerly. Whenever I read how Sri Acharya had written about a Guru and  the importance of attaining a Guru, I used to yearn for a Guru, thinking about how this birth of mine is a waste without attaining and serving a Guru. I would think, how could I attain Sri Periyava as a Guru when he was in Kanchipuram and while I was a woman, who did not know how to behave in a Mutt environment. I used to also think that I was not orthodox either. But I used to console myself with Sri Periyava’s own words that God will send the right Guru at the right time.

I heard about Sri Guruji through my colleague Smt. Lakshmi in Indian Overseas Bank. She told me that there was a young sadhu who lived near her home, who did kirtan incessantly, who was a Krishna Bhakta and that bhajans would go on through the night. I thought, may be I could also visit once and see for myself.

That day was the most significant day of my life. We got ready for work but missed the bus and there was no way that we could go to office that day. So I left with Lakshmi, thinking that at least I could go and see the sadhu, and reached there around 10.30 in the morning. When I went there, Sri Guruji was singing “Paal Vadiyum Mukham” by Ooththukkadu Venkata Kavi along with someone. He looked very young. But His innocent and handsome visage, slender body, the mark of an ascetic and the divinity of the simple environment – all created an astonishment and an inexplicable mental state. This is how I met my Guru for the first ever time.

Later, in a very short span of time, surprisingly, our entire family started loving Him. Due to the good karma from our previous birth, we also got the blessing of Him staying with us. Even though we accepted Him as our Guru and treated Him reverently, He did not expect any respect or any special treatment and considered Himself to be a part of our family. We also considered Him as one among us.

Before Sri Guruji’s arrival, I used to pray to Lord Guruvayoorappa to safeguard our home while locking the door during the day, since I also went to work. After Guruji’s arrival, I felt like Sri Guruvaayoorappan listened to our prayers and came to our home. There is no boundary to write all the experiences with Him. But still I am trying to write as much as possible. I have realized through various incidents that Guruji is always with us and that He knows everything that we do. I will cite one instance.

Once when Sri Guruji had gone to Kumbakonam, my daughter Vishnupriya and I sang a new song in front of Sri Guruji’s picture. That evening a satsang was held, after Sri Guruji came back. Sri Guruji, surprisingly, looked at me and asked me to sing that same song. There have been several such instances like this. I would have read a certain book. That same day, Sri Guruji would speak to me very beautifully about the same subject that I read about. Or that conversation would explain an incident that happened at work. However it was, he would let us realize that HE was omnipotent.

Since we lived under the shade of His Holy feet, I used to feel very happy thinking of all the miracles that happened in His holy presence and the darbar that He ran every day.

His power of memory was astonishing too. He had to listen or read about anything just once. Whenever or wherever it was asked or referenced, he would say it, ‘as it is’. He knew all the details of all the families that were devoted to Him. Even they would have forgotten it themselves. But Sri Guruji would never forget even a trivial matter. Sometimes, he would behave like a child. Sometimes he would become intent. Sometimes he would say that he did not know anything. Sometimes, he would take up a subject and explain, to everyone’s surprise. No matter which saint he spoke about, which god he spoke about, which holy place he spoke about, he would mesmerize everyone with his oratory skills.

Any pilgrimage should be done with Sri Guruji. He would astonish us by explaining about the temple, the place, details from the Puranas and history, along with his own experiences. We would wonder what had been the use of all the times that we had visited the same holy place but not knowing all these details.

He was friendly with one and all and changed us to the path of divinity without any difficulties. It was surprising to think through in solitude how much our lives had completely changed around then, compared to our lives in the past. I used to be astonished to see how certain things that he told his devotees playfully came true over time. When my son completed his high school, ge told him that he would go to America for higher studies and he is in America now.

His compassion knew no bounds. He showed no difference on the basis of poor, rich, status, caste, etc. He was friendly with everyone. He treated elders with respect. He was an expert in giving devotees remembrance of God during their last days and have them attain liberation. I could mention two incidents to prove this.

When Sri Guruji went on a pilgrimage to Kashi, there was an old lady who was suffering from kidney trouble. Sri Guruji could not bear the old lady’s pain and took some holy ash, put it on her forehead and a little in her mouth, and said that God would take her with Him soon. After that, within a month, the old lady reached God’s holy feet.

The mother of Smt. Lakshmi, who first took me to Sri Guruji, resided close to the home that we now live in. Her name was Kalyani Mami. She got cancer. That devout lady did not go anywhere, despite her relatives compelling her to do so. The reason being that she wanted to get as much Sri Guruji darshan as possible, as she knew that she would not live long. Mami lived in an apartment close by, in an upper floor. Whenever Sri Guruji went out, she would get his darshan from the balcony. Guruji also made the driver honk when he passed by that home. He would go slowly and wave at the mami.

It was surprising that Sri Guruji had not visited her even after her condition deteriorated. One day when I was returning from Ashram with Sri Guruji, he went to their home taking me with him too. He asked for milk, drank some and poured the rest little by little in that mami’s mouth, like he was feeding a baby. Tears were overflowing from the mami’s eyes. Sri Guruji told her to keep chanting the name of Rama and not to worry about anything. He also told her that he would take care of her children, and returned after spending some time there. After that, within a short span of time, the mami attained God.

It was around 1.30 am in the night. I got the news in the night. I thought I would tell Sri Guruji in the morning. But he told me even before I could tell him. He also mentioned that he knew about it at night. But he would never show easily that he knew about anything. But according to me, there is nothing that He did not know. He would pretend like he was scared but would never be scared of, or worried about anything. He would consider others’ misery as though they were his own.

I would like to share another incident that showed his premonition. Once there were arrangements being made for a function in Madhurapuri Ashram. It was prime summer and hot everywhere. One week before the function, Sri Guruji told Kesavan, Vishnupriya and me that a big cyclone was going to come and torrential rains were expected. We thought that he was just joking. Immediately, he asked me to check for the weather forecast in the newspaper. He asked us to call the Meteorological Department in Nungambakkam at 10 pm in the night. We also searched for the number in the telephone directory but we got sidetracked and let it go. Suddenly within two or three days there was a huge cyclone with lots of rain. The function did not happen and Sri Guruji was not worried about it either.