In our pradakshina of Bharata desha with HH Sri Sri Muralidhara Swamiji’s kirtans, we now move out of Kerala heading northward to Karnataka. 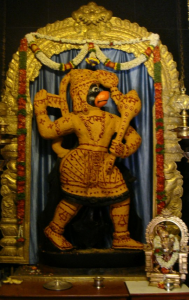 In Kalkare, a region in the outskirts of the city of Bangalore is a temple whose tower depicts a unique Odiya temple architecture. This is the temple of Sri Sundara Anjaneya Swamy established by Sri Swamiji. The temple is on two levels. The main temple is on the upper floor with the beautiful, majestic 12-feet tall Sri Sundara Anjaneya Swamy. It is said that Anjaneya Swamy is present where the name of Rama reverberates. When this temple was built, hundreds of devotees wrote the name of “Rama” by hand  in each of the 1,25,000 bricks that were used to build the temple.

The lower floor of the temple houses a large 3500 sq.feet hall. One can have darshan of the curled, mighty tail of Sri Sundara Anjaneya Swamy in this lower hall, as also scenes from the Ramayana. Along with beautiful pictures of Sri Swamiji and Lord Sri Rama, a unique idol of Sri Veda Vyasa also presides over this lower hall as the temple is built in the precincts of the Veda Vyasa Purana Patasala Trust.

The outer walls of the temple proclaim that anyone who is suffering from depression and other psychological issues will find relief by visiting this temple and praying there.

During Sri Swamiji’s first visit to the site of the temple (before the temple was built) he went into a meditative state and mentioned that he could feel the presence of Anjaneya Swamy in that location. The moment he said that, devotees saw that, out of nowhere, clouds appeared in the sky forming the shape of Sri Hanuman carrying the Sanjeevani mountain. (Read in detail about this incident here.)

Sri Swamiji has composed a song in which he describes this vision of Hanuman flying in the sky – “Gagane Sancharam Vanaram Dhyayami”, set in Nattaikurinji Raga and Adi Tala. The lyrics and meaning of the song are below:
Gagane Sancharam

I see (in my vision) a monkey traveling in the sky

He carries the Sanjeevani Parvatha and the mace!
This Chiranjeevi bestows the desired fruit (to the person praying to him)