Boston GOD Chapter celebrated Guru Poornima in a very grand manner on Friday, July 31st 2015. Satsang was held at the residence of Sri.Narayanan and Mrs.Rekha Narayanan from 5-6:30pm with Nama Sankirtan followed by the rendition of Guru Kirtans. Special Guru Poornima celebrations took place in regular Friday satsang at The Hindu Temple of MA which included the weekly discourse on Srimad Bhagavatam by Sri Narayananji. Since it marked the auspicious day of Guru Poornima, he used the occasion to highlight the significance of “Guru Poornima” and Sage Veda Vyasa. He narrated a beautiful hymn which glorifies Sage Veda Vyasa as Lord Brahma with only one head, Lord Vishnu with only two hands and Lord Shiva without the third eye.
The rest of Sri Narayananji’s discourse was focused on the importance of the Guru in a devotee’s life, and he talked about “Dhruva Charitram”, and the story of Sabari from Ramayana to illustrate the greatness and importance of Guru. More than 50 People attended the satsang and got the grace of Sadguru. 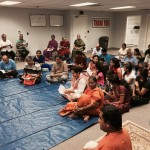 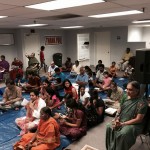