G.O.D. Houston celebrated Sri Rama Navami on a grand scale for four days from March 30 to April 02 2017 at Houston Namadwaar. Sri Premika Varadan and Sri Madhuri Sakhi stood as Lord Rama and Sita Devi for that week and enjoyed the celebrations.

March 31: The celebrations resumed with Sundarakand parayanam, followed by pravachan in the evening by Sri Narayananji, a disciple of Sri Swamiji from Boston. The devotees were in a state of bliss listening to the very inspiring and melting story of the Lord Rama. Narayananji narrated several anecdotes from the life of various Azhwars and their bhavam towards Lord Rama, and also beautifully drew parallels between Srimad Bhagavatam and Sri Tulsidas Ramayan. Sri Hanaumanji was worshiped with a Vada mala offering.

April 01: The day began with Valmiki Ramayanam parayanam. Three students from the Gopa Kuteeram narrated stories of Bhagavan. This was followed by pravachan of Sri Narayananji. He continued to immerse devotees in bliss with Bhagavan’s katha and also had them burst into laughter with several humorous anecdotes and quotes that Sri Swamiji would share. Narayananji also made a very serious point in a very light mode by saying when Lord Rama was playing hide and seek, others would find him immediately no matter where he hid – the meaning was to convey that Bhagavan cannot hide from us! Over 100 Devotees attended the event and had the blessing to hear the stories of the Bhagavan. Sri Hanumanji was worshiped with a Vada mala offering

April 02: The day began with Tulsi Ramanayanam parayanam. Sri Premika Varadan and Madhuri Sakhi were taken on a short procession around the Namadwaar followed by Sita Kalyanam, Sri Narayananji concluded his pravachan series. Sri Hanumanji was again worshiped with a Vada mala offering.
One interesting thing to point here is there was a forecast of thunderstorm on the weekend and the devotees did what they know, which was to pray for the best and leave the rest to Bhagavan. As always, their prayers were answered and everyone enjoyed perfect weather celebrating the Sri Rama Navami Utsav. 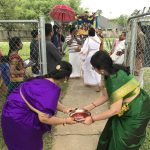 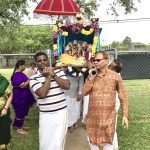 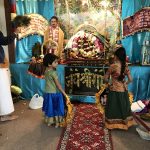 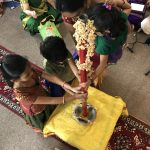 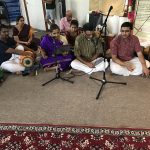 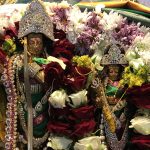 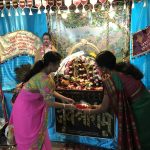 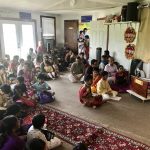 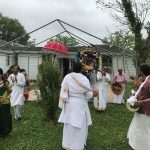 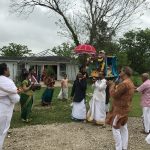 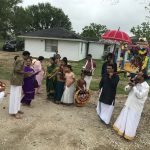 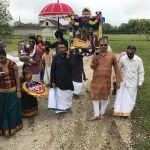 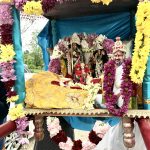 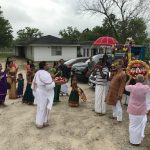 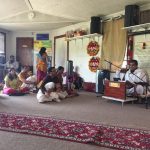 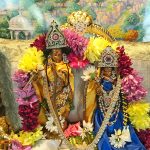