Sri Gargi was an ancient Indian philosopher, highly accomplished in her understanding of Vedic precepts and in philosophical debate. Her life adds to the ample evidence that women were highly revered in ancient Indian culture and that they were also educated and involved in the study of scriptures and philosophy.  Let’s learn more about her. 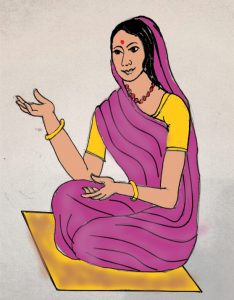 3. Name the Upanishad that mentions about the philosophical debate which was attended by Gargi and other exalted individuals.
a. Mandukya
b. Taittiriya
c. Brihadaranyaka

4. In which king’s court did the philosophical debate take place?
a. King Dasharatha
b. King Janaka
c. King Dilipan

5. Name the Sage with whom Gargi took up the philosophical debate.
a. Sage Yagnyavalka
b. Sage Agastya
c. Sage Bharadwaja

6. What is Gargi’s other name?
a. Vachakni
b. Sita
c. Parvati

7. Gargi showed that in Vedic culture it was expected for women to become greatly learned and knowledgeable in the Vedic Sciences and also that women could discuss such topics with other sages who also shared their knowledge with them. True or False?
a. True
b. False

8. In which King’s court was Gargi honored as one of the nine gems (Navarathnas)?
a. King Ashwapati
b. King Janaka
c. King Sukaushal