Why we get mad - and why is it healthy?

It was a dense forest. Many passed that way including caravans of merchants occasionally using this route to reach home quicker. One fine day, one such caravan of merchants saw a very unfamiliar sight. They were very surprised and so stopped for a while to check if their eyes were playing tricks on them. What did they see?

There was a small cave on the side of the route and a middle aged man who was actually living in there in the midst of this thick jungle! While all were slowly digesting what they saw, the eldest amongst them could not contain his awe and said, “Ah! Look at his face! It is exuding so much “tranquillity!” 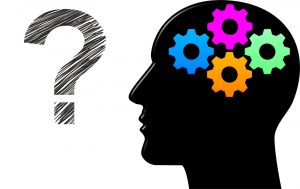 Another joined the refrain, “See his eyes! It is so deep and magnetic. I think he must be an ascetic par excellence.” Another begged to differ: “He must have committed some crime and hence is in hiding here”. His friend looked at the elderly person who spoke first and said a bit sarcastically “Even I am having a bright skin tone! Would that make me an ascetic too!!” Once such a ball starts rolling, is there a possibility of any stopping!! “He must have had some family related crisis! Unable to face them he must have escaped to this jungle.” “Yes! It does looks so.. he is a coward… “, “This is real sloth. Why can’t he work hard in a town?” “Must have been a failure in life…” The chorus was replete with labels and judgements. This motley group of merchants slowly passed by the cave.

Can we really see what just happened? A person wishing to be a hermit, wanting nothing from other people, desiring to be far away from the madding crowd, is living all by himself in a forest. He had nothing to do with any of these merchants. Yet none spared him. They spewed out whatever they opined. It wouldn’t stop here. Even after reaching their town they would endlessly discuss and debate about this person in the forest. Seeking to see the faults of a defects in other while overlooking the loads of defect within is the first defect of the mind. This is how we generally are; this is how our surroundings also is. When this is so, when someone comments about us, we react variously – with fear, sorrow joy, anger, rage, shame, frustrations. These are triggered in us by the words and actions of people around us. When someone praises us we find it difficult to control the joy; when chastised anger rises uncontrollably; insults provoke anger in us; when our shortcomings are exposed we shiver in fear..We can go on and on like this.

How do we come out of such a mess? Even to an extent if we need to be unaffected by such reactions, we need to somehow compose ourselves during such times. How do we do this?
First we need to see the one who has uttered the words which stimulated an emotional response in us. If the person is a fool or a chronic gossiper or if he had some previous enmity with us, we can tell ourselves “He is flinging such allegations baselessly; He was not in the right mental condition when he spoke; He is just blabbering without thinking through; He is deliberately trying to provoke us;”

This way, once we come to know about the source we can find repose in spite of the adverse talk or action. Before we get swayed by words or acts of others, it is important that we seek to understand the true source of such words or acts. A similar phenomenon happens within us and this can be clearly perceived when we practice meditation. Some thoughts which provoke very strong emotions also keep running in our mind especially during meditation.

“We fashion ourselves to be humble, but how can we get such egoistic thoughts”, “Why am I getting such nasty thoughts?” , “Oh God! What a person am I? My thought flow is worse than the gutters”. Such things cross our minds during meditation. This would typically be the stimulus for strong feelings of rumination, sorrow, self loathing, prayers so on and so forth. “Whatever we do, can we really win over such thoughts?”. We may be pushed to desperation too!

Let us shift gears and look at another scenario before we discuss the solution to overcome the above. I have seen some people; some keep asking me as to how to meditate till the very end of their lives; No amount of answers would move them. They just keep asking and their life would be over. Some looking at themselves would lament that they have no devotion; that they lack wisdom(gnana) and dispassion(vairagyam). Initially their lament and regret would be sincere; But then in course of time they would even take pride in this continuous lamentation and hence just continue this vigorously.

There are another type of people. When we visit a temple we can find them in the sanctum singing loudly or praying loudly. Every now and then with the corner of their eyes they would check if people around them are paying attention to them. This is their real inner state – more than their desire to attain divinity, they actually desire to propagate that they are divine..

Such is the nature of the mind. Many many types of thoughts keep coming continuously – that’s nature and that’s that! Instead of debating “Why?” or “Is it fair” etc., we need to redirect the focus on the very source of such thoughts which evoke the emotions. The one source of such varied thoughts is the mind. We need to somehow realize this intensity of such flow of thoughts. There is actually only one way. We need to understand that mind is merely a phantom, that which is truly not there, it is a lie and hence a liar too. All that it shows or says are also to be ignored. This is the right and direct way to relieve the intensity of thoughts.

If we start debating on the thoughts, then it in turn becomes a viscous cycle of creating more contradictory thoughts leading to great confusion resulting in higher conflict and loss of inner vitality. In course of time laments from this confused mind itself would be taken as a source of pride and lamenting to one’s own self would become the habit – there cannot be a worse path to self- destruction.

Hence persistent inquiry on the true nature of the mind is the most productive path to reducing thoughts.

The state of Maharastra in India is renowned for the spiritual giants it had given to the world. Sant Nama Dev, Sant Thukaram, Sant Gnaneswar, Sant Jana Bai…. the list is almost endless and Sant Ekanathar is one amongst the most exalted saints of India. He is frequently quoted as the one of the best examples for devotion towards a Guru.
An incident in his life highlights his broad mind, forbearance and his compassionate nature. Sant Ekanath lived in a village called Prathinapura, in Maharastra. He practised Bhagavatha Dharma – singing the names and glories of the Lord. He performed pooja to the idols of Rukmini and Panduranga which was presented to him by his Guru – Sri Janardhana Swami. Sant Ekanathar was particularly famous in his village for his patience; nobody ever saw him angry and nothing could ever make him lose his temper. Almost all his fellow-villagers paid respects to Ekanathar for his great virtues.

In the same village there were a few vagabonds who used to regularly meet for gambling. One morning it so happened that one of them arrived late. When the others looked at him with a questioning look, he said, “I had been to Sant Ekanathar’s residence to pay respects to him. So I could not come here in time.” On hearing this, the others guffawed and with a mocking tone asked him, “So my friend, what is so special about this gentleman, which makes you fall at his feet?” “Sri Ekanathar never loses his temper under any circumstance. Isn’t this trait unusual?” They teased him further…”How can he who never gets angry be called a human?” On hearing thus he immediately answered,”That is the reason why I regard him a saint…” The conversation which started in a light vein, took a serious turn… In the end one of them challenged,”I shall make Saint Ekanathar lose his temper and prove to you all that he is no different from others and I shall accomplish what I just said by tomorrow itself.”

The next morning, Sant Ekanathar, in line with Bhagavatha Dharma – went to bathe in the Holy Godavari river early in the morning. While he was retuning, the one who threw down the gauntlet, was waiting for Sant Ekanathar on a rooftop with mouthful of Paan (Betel leaves and Betel nuts, usually taken after meals). While walking back home, Ekanathar suddenly felt something wet falling on him, without any signs of surprise, and without losing his composure, walked back to the river for a holy dip.

The defiler was surprised, but when Sri Ekanathar returned from his second dip he again spat on this great saint. Sri Ekanathar again went back to the river for a dip without losing his calm. But the vagabond was persistent in his efforts to make this saint angry, and he kept on spitting at Saint Ekanathar. Each time he spat on the saint, he could not even detect a faintest frown in Ekanathar’s face. As the twilight of the dawn started to bounce off from the glittering waters of Godavari, the vagabond got tired of spitting at Ekanathar. He was totally bewildered on seeing the patience and forbearance of Ekanath. While his mouth was aching stiff due to repeated spitting, Ekanathar was looking as composed and as fresh as he was early in the morning!

The vagabond feeling guilty and ashamed, rushed down to fall at the feet of Saint Ekanathar. Saint Ekanathar, with eyes brimming with compassion and love even for this offender, blessed him. Now the vagabond was totally perplexed, “Swamiji, how is it possible for you to be like this?” Saint Ekanath replied, “Brother, if you can stick so stubbornly to this vice of harrassing sadhus, it isn’t the least surprising that I should, on my part, should stick to my virtue of not losing my temper.” “I am on the way to offer my morning worship to my Lord. The dirt on my body can be easily cleansed by a dip in the river, but if I let anger enter my mind it defiles the mind and no amount of bathing in any river can cleanse me of this impurity. Worshipping with an impure mind would not bear fruits. So, can I ever afford to lose my temper?” Such a great soul was Sant Ekanathar.

Remembering Sant Ekanathar when we get angry, would help us to regain our composure without much difficulty.