Generally, we are thankful to one who has done us a good turn. When we stand to gain due to another’s help either financially, materially, or physically we feel grateful to him. We revere this person who has helped us. If the help was a timely one, we feel moved. But this alone cannot be a sign of our gratitude. For example, let us say that someone, through his hard-earned money, helps us get admitted in a good school, offers us boarding and lodging, and meets all our needs. It is indeed right that we verbally and mentally thank him. But would this suffice? His intention in helping was for us to get educated. To actually pursue and do well in our studies is the right way of showing him our gratitude. Then he would also feel elated. Likewise, God has, in numerous ways, helped us in the world. What is the way to show our gratitude to Him who has given us good eyes? We may, for instance, enjoy seeing His divine forms in the temple; or, read the Bhagavatam. Well, there are several such ways! Giving us a healthy body, a good life, intellect, and holy association (Satsang), God also gives us a precious Guru. Why? God bestows on us human birth and comforts in a janma (life) only so that we attain liberation; therefore, to embrace a Guru and attain liberation in that life is the mark of true gratitude.

Sri Bharath from Thanjavur, an ardent devotee of His Holiness, narrates this incident…
I am blessed with the opportunity being in the divine presence of Sri Sri Swamiji, whenever Sri Swamiji visits Thanjavur. Mahans generally do not say anything for fun. Even if they may sound so, their golden words are pregnant with a treasure of inner meaning.
Sri Swamiji was recently in Tanjavur on a tour. Sri Swamiji was about to leave, and He had alighted the vehicle. Suddenly from inside the car, I noticed someone coming running towards the vehicle. I realized it was Subbaiah Raju.

Subbaiah is known to our family. Of late, he was facing a multitude of troubles in life. He did not have a proper job and hence was devoid of steady income. This added to his financial woes, not to mention the other family problems he was facing. Once when he came to our place, we told him about Sri Swamiji and asked him to have His darshan the next time Sri Swamiji graced Thanjavur.

There he was, to have darshan of Sri Swamiji.

Then Sri Swamiji, with a beautiful smile on His effulgent face, turned to me and said, ‘Are you playing? Do you think I know to bless someone?”

Sri Swamiji did say it in a jovial manner, but that had so much of a hidden meaning.

We mortals take pride in even the smallest act that we perform. We walk about in a heavy headed manner though the earth spins by dint of our effort.

Sri Swamiji who has changed so many lives by His sheer look and grace, uttered those words, to teach a lesson to this student – a lesson on humility!

Gratitude - The Mother of all Virtues 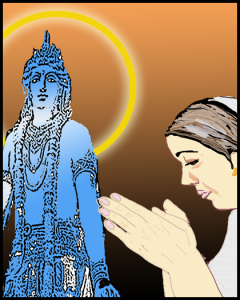 Gratitude, the mother of all virtues, is profound thankfulness.  It is a seed sown in the soil of love and humility. This seed sprouts out a new life full of happiness and contentment. Generally, only mahaans (great saints) are found to be in that state of constant gratitude to the Lord. However, Srimad Bhagavatam points out that even a normal mortal can reach that exalted state of gratitude by the grace of God and Guru.

There is one bhagavata (devotee) shown in the Bhagavatam who, though being a mere mortal, exemplified gratitude to Bhagavan par the level of a mahatma. This is none other than Kunti Devi. Kunti’s prayer of gratitude, called Kunti Stuti, appears in the very first canto of Srimad Bhagavatam, thus finding first place among the numerous stutis (songs of praise of the Lord) present in the crown jewel of the Puranas.

During her entire lifetime as a queen, Kunti faced misery after misery, but at the same time, her family was graced constantly by the Lord’s divine presence.  After the Mahabharata war, Lord Sri Krishna miraculously saved the unborn child of Uttara (Kunti’s grand-daughter-in-law) from Ashwatthama’s brahmastra weapon.  When this sole heir of the Pandavas was saved, Kunti could no longer hold hidden her gratitude to her beloved Lord Krishna who had been by her side through thick and thin. A very touching and beautiful praise is then born!

The moment Kunti bows her head in gratitude to the Lord, the veil of ignorance is lifted and she addresses her nephew as: Namasye Purusham Tvadyam – “My obeisances to the Lord who is The First”; who is above any man’s intellect and beyond the three Gunas. She describes His glorious nature that can be easily misunderstood by a foolish observer, because of His deluding potency. She salutes the Unborn One who was born to Devaki. Kunti Devi cherishes His beautiful attributes, His lovely lotus-like navel, His lotus garland, His lotus eyes and finally His lotus feet- the sole refuge of His devotees.

HH Sri Sri Muralidhara Swamiji says that gratitude to the Lord is nothing but constantly reminiscing the various instances in our lives that He showered His grace on us. This is exactly what Kunti does in her stuti. She recounts every instance that the Lord saved her and her sons – the poisoning attempt, the attempt to burn down their wax palace, the attempt to humiliate Draupadi in a courtroom.

As the prayer of thankfulness continues it spontaneously reaches an extraordinary level where she prays for calamities to befall her at every moment for they bring Krishna to her side! Simply by nurturing true love and gratitude in her heart, Kunti has reached a state where she realizes that only the Lord’s company will give her true happiness. She is resolute to accept miseries and forego momentary happiness to usher in the constant presence of the Lord in her life. Finally she prays to Him to cut asunder all her bonds and to bless her with an unswaying mind that is directed only to Him, just like the Ganges that flows in one direction endlessly into the ocean.

Kunti stuti is a treasure box and sparkling brilliantly within it are the gems of knowledge, love and gratitude. It reflects her knowledge like that of a sadhu, it reveals her love like that of a bhakta  and above all, it shows the constant state of gratitude she is in, like that of a mahaan.

We too have everything to be grateful for, starting from this human birth! All that we come across in life – be it happiness or sorrow – is purely a part of His plan to attain Him. Just as He never stops his shower of compassion, let our prayers and gratitude continually go up to Him, for there is nothing else that pleases Him more than a heart full of love.

Both of them will get benefited. While the person who writes with love and devotion will be able to savor the result better, it is undeniable fact that the other person also will get the benefits.