A visit to Dwaraka is not complete without visiting the shrine of Srinathji in Nathdwara, a town in the state of Rajasthan and about 700 km from Dwaraka. Here Srinathji is worshipped according to the principles  of Pushti Marg, a path described by Sri Vallabhacharya. 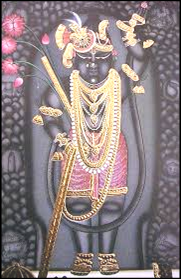 It was in the year 1672 that ardent devotees moved Srinathji from Mathura to present day, Nathdwara to save him from Aurangazeb’s soldiers who were on a rampage, desecrating and looting Hindu temples and forcefully converting the citizens to Islam.

Sri Sri Muralidhara Swamiji has visited Nathdwara and has had the darshan of Srinathji. He describes the Lord in a beautiful song. The song has been set in the raga Kedara Gowlai. The song and its meaning is presented here:

Pallavi
Srinatha is My Lord
And, my Lord is the Lord of this universe (shrI nAthah…)

He is the Lord who is worshipped by the followers of Pushti Marg
He is cherished by your favorite Muralidhara!