By the immense  grace of Sri Swamiji, Minneapolis GOD Chapter celebrated Rama Navami in a very grand manner on Sunday, April 6th 2014. The celebrations started off with Mahamantra and Vishnu Sahasranama chanting.  This was followed by a lecture on ‘Narayana Namam’ by Sri. Narayanaswamyji and ended in Anjaneya Utsavam and Rama Nama chanting.  Madhuragitams on Sri Rama were also rendered by the bhajan group. Gopa Kuteeram children learnt about ‘Sethu pAlam’ (bridge)  in Rameshwaram and learnt about Rama Katha.  They also built a Sethu Bridge  monument to Lanka, Palace of Ravana with legos! They went on to make a Rama Nama Garland for Hanumanji, with the likhita japa that they had been doing for weeks. About 20 people attended the satsang. 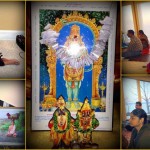 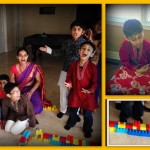