On Saturday, August 1st, 2015, devotees in Seattle came together to celebrate the auspicious occasion of Guru Poornima. The celebrations were conducted as part of the regular weekly satsang at the VEDA Sri Venkateshwara temple in Redmond, Washington. 15 devotees took part in the celebrations. The first hour was filled with the chanting of Mahamantra to various beautiful ragaas. This was followed by blissful and nectarine Guru Mahima bhajan rendition for the next one and half hour. The satsang concluded with a rendition of Kaliyaiyum Bali Kollum followed by some prasadham distribution.

As part of the previous quarter, the Seattle Gopakuteeram children, out of their true love for Sri Swamiji, had composed numerous poems. The children recited these poems set to various tunes and also many kids accompanied on various musical instruments. The whole recital was recorded in a CD that was then offered to Sri Swamiji on the occasion of Guru Poornima. 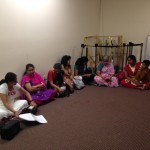 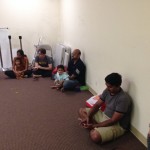