The Clan with No Intellect 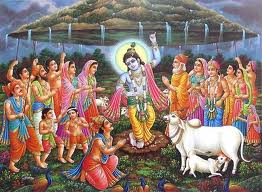 So what does it mean to unlearn? In Tiruppavai, Sri Andal says ‘arivondrum illaada aaikulam’ (literally: cowherd clan who has no intellect/sense). Of the 6 senses, they (the cowherds of Vraja) possessed none, she says, hinting that their only claim to ownership of Krishna was their unflinching blind faith; which did not come from any physical or mental attributes including the intellect. Such faith is what moves mountains, literally in the case of Lord Govinda, who felt the responsibility to protect the Gopas who surrendered to Him without doubt. In this same pasuram (verse), Sri Andal addresses Krishna as ‘kurai ondrum illaadha Govinda’ (the faultless Govinda). Lord Krishna—who is perfect and hence knows perfectly well who is eligible for His highest blessing of pure love—fills the minds of those who are “without a mind” (as against those whose minds are ‘full’ of intellect, where there is little space for the love-embodiment Krishna to take charge). The phrase “kurai ondrum illaadha Govinda” also highlights the blemish-less characteristic of Lord Sri Krishna, as only one who is entirely without fault is qualified to accept another’s uthama sharanagathi (highest surrender).

Sri Koorathazhwar was a great disciple of Sri Ramanujacharya. He was a very learned person and a scholar, and although senior to Sri Ramanuja in age, was an epitome of Acharya bhakti and humility. One day, when he and many other disciples were with Sri Ramanuja, a deaf and dumb man came to seek the Acharya’s blessings. Sri Ramanuja was intensely moved on seeing the plight of that man who could neither say nor hear the Divine Name of the Lord. Tears filled the eyes of Sri Ramanuja as his compassion poured on a soul who could not attain Vaikunta in that birth simply because of his circumstances. Then Sri Ramanuja asked all his disciples to leave the room immediately and close the door behind them, so that he could be alone with the deaf and dumb man. All the disciples, including Koorathazhwar, left the room. However Koorathazhwar was curious to see what his acharya was going to do. So he peeped in through a window. He saw his acharya place his feet on the head of the deaf and dumb man and bless him, saying that now he would attain Vaikunta.

When Koorathazhwar saw this, he broke down and began to cry, lamenting his own fate. Regretting all his learning, scholarship and intellectuality, he cried wishing he had been born deaf, dumb and a simpleton so that he would have had the great fortune of having his Acharya’s feet placed on his head, thus attaining life’s highest goal so simply and easily!

The product of a still mind is not inaction. The point of freedom is not to be become care-free. The result of unlearning is not in becoming stupid. As Mahans illustrate, the purpose of life is not in acquiring knowledge, but in acquiring simple faith. Where such faith exists, Krishna comes rushing, for it is His vow to protect His people, His devotees; as He declares before lifting the Govardhana mountain:

tasmAt mat-charanam goshTHam man-nAtham mat-parigraham
gopaye svAtma-yogena sOyam me vrata Ahitah
–Srimad Bhagavatam 10:25:18
(I have taken a vow to protect those who have taken shelter at My feet. Therefore I shall protect with my yogic power these, My people, who have taken Me as their Master and who have surrendered to Me.)