Can I Chant All Names? Or Should I Chant Only Mahamantra? – Answers and Beyond #13

In this “Answers and Beyond” series, we shall read, understand and enjoy Sri Swamiji’s lucid answers to some thought-provoking questions posed by various devotees. 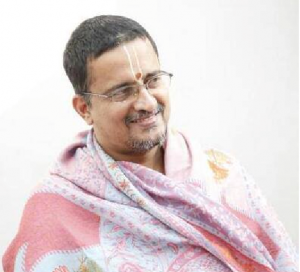 Answer:
In any matter, there is a gradation, such as good, better, and best. We should perceive the answer to this question in the same light. If you ask, “Is it good to keep chanting the names of all the deities?”, then yes, it is most definitely better than doing nothing. At the same time, it is best to hold on to one mantra and do the japa with single-minded focus. To comprehend this well, we need to understand the temperament of the mind.
Blinking is the nature of the eye. Asking why eyes blink is meaningless, isn’t it? Similarly, to oscillate is the nature of the mind. Asking why the mind oscillates is meaningless. Because, that is its nature. One day, it is theistic and the other day changes to being atheistic. On one occasion, it trusts everything and another, it does not trust anything. Those who are able to control this mind and let it focus on one thing till the end, are those who reach their destination.
If one asks whether to chant the name of Shiva or Hare Rama, the answer is, one has to chant the same mantra incessantly, no matter what mantra it is. That is when it helps to reach the goal.
Just because one has to chant the same name continuously, is it alright to chant ANY name? Is it good to chant the names of the village deities (grAma devatas)? Or let’s say someone likes their parents the most. Is it fine to chant their parents’ names continuously, over and over again?
Chanting the names of the village deities or parents’ names is not wrong; it is good. We can come to a conclusion as to which name is most fit to chant, depending on the purpose for the japa.
The mind is a confluence of thoughts. Without thoughts, the mind does not exist. This can be best understood with an example. We have a cellphone on hand. If we keep watching the cellphone attentively, it exists as the mind. In the same way, iIf one meditates upon his/her Guru single-mindedly, the Guru becomes the mind. Whatever the mind is involved in, it becomes just that.
Let’s say a person is traveling by train. He is sitting by the window. The route is so beautiful. But he is worried about a friend of his who is fighting for his life. If a co-passenger asks whether he saw the beautiful bird or not, his answer would be, “Oh I did not notice,” since he was engrossed in some other issue.
To summarize, ‘As you think, so you are!’ As much as we think fixatedly about something or someone, we imbibe all their characteristics. Chanting the name of a village deity single-mindedly, will result in imbibing all the characteristics of that deity. Even our most loved ones definitely have likes and dislikes, prejudices, positives and negatives. This is the universal nature. So when we chant their names, we get the good from them on the one hand and get their shortcomings too, on the other hand. This is why, for those who have the state of liberation as their ultimate goal, it is said that they should chant the names of those deities who are in that ultimate state.
Not only that. If the mind has to be fixated on something, it should be attractive to the mind. Let’s say someone is watching a channel on television. If a program related to agriculture is in progress, which is not interesting to him, he will change the channel right away. Because a program related to farming does not interest him. For the mind to be fixated, we need interest and inclination.
Let us figure out the answer to our original question, keeping in mind all the above mentioned details.
Instead of chanting several names, it is best to hold on to one. The one with that one name should be with no shortcomings, and should be the absolute Brahmam. And also, that should be attractive and captivate the mind. Japa should be done with single-minded focus. Only then will we be able to attain that state.
While mentioning about Bhagavan Sri Krishna, it is said, “Poornam Brahma sanaathanam.” It means that He exists as the absolute Brahmam Himself. By chanting His name, the chanter also attains His state.
Not only that. Kalisantarana Upanishad states that this Hare Rama.. Mahamantra is capable of eradicating the vile effects of Kali.
So whatever name one chants, chanting Mahamantra alongside, results in great progress in their japa, since the sins of Kali are gone.
There is nothing greater than doing Mahamantra japa alone, with single-minded focus.