Bhagavata Dharma is the easiest and yet the most secretive dharma or path to God. Here, the devotee finds refuge in the Lord and spends every moment in His constant remembrance. In Srimad Bhagavatam, Lord Yama lists twelve people who have realized the essence of Bhagavata Dharma. Among these great devotees is one unlikely person—the asura king Mahabali (also known as Bali Chakravarthy). 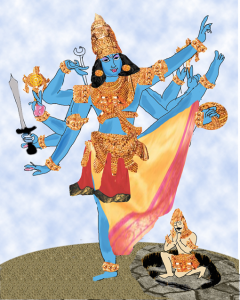 King Mahabali was truthful, steadfast, and charitable; he revered his Guru, protected the brahmanas and above all, had unpretentious love towards Bhagavan. A unique blend of some striking traits of his ancestors, Mahabali was devout like his grandfather Prahlada, steadfast like his father Virochana, but (his only shortcoming)egoistic like his great grandfather Hiranyakashipu.

When the Lord decides to bestow His grace on someone, He wipes out their vices so He can place Himself permanently in their heart. This is illustrated beautifully in Brahma Mohana leela, and Govardhana Leela during the descent of Sri Krishna in Dwapara Yuga. Here too, the Lord was waiting for an opportunity to bestow His blessings on Mahabali by wiping out his pride, albeit in a unique way.

With the blessings of his Guru Sukracharya, Mahabali had won over all the three worlds and forced the devas out of their abode. Distressed to see the state of Indra and her other sons, Aditi fasted and prayed to the Lord, who appeared before her, and promised to be born as her son and get the heavens back for his brothers.

Lord Sri Hari then condensed His resplendent form to a dwarf brahmana boy – Vamana – and was born to Aditi. He proceeded eagerly to the sacrificial hall to see His beloved devotee with an unwavering resolve to grace him once and for all. As soon as Vamana entered the sacrificial hall, Mahabali asked the lustrous brahmana boy how he could serve him. The boy turned down all the wonderful things listed by Mahabali and asked him for three paces of land instead.

His ego bared, Mahabali felt offended and remarked that a mere three paces of land was a foolish request from the brahmana. However, Sukracharya recognized the boy to be none other than the Lord Himself. He intervened and warned Bali that it was Lord Hari who had come to take away Bali’s possessions and his life. But Bali remained firm in his resolve to fulfill the brahmana’s request; moreover he said he would be happy to lose everything to the Lord! It was indeed the Lord Himself who made Sukracharya speak thus; He seized every opportunity to paint a grand picture of His devotee.

Mahabali then washed the Holy Feet of the Lord with the sacrificial waters and knowingly parted with all he had. When the donor is righteous like Mahabali, the receiver is none other than the very Lord of the Universe.

The charming form of Vamana grew, covering the earth, the heavens and the subterranean regions. Mahabali then witnessed the magnitude of the little divine boy’s splendor. The entire universe nestled in Him. The Lord covered the earth, heavens and all the worlds in two strides and unable to find a space to place the third step, condemned Bali of giving a false promise! The Lord knew His devotee and the devotee understood the Lord’s intention.

Mahabali then surrendered to the Lord and said, “Pray, place your third footstep on my head. Disguised as an enemy you indeed are our greatest friend as you snatched away power from us, who were blinded with arrogance. What use is this body, which is certain to die one day, what use are family and relatives who will certainly bring about transmigration?”

Thus Indra got back his heaven; but Mahabali got the most priceless gift, the Lord Himself. Extremely pleased with his surrender, the Lord granted him a place in Sutala, a region more pleasurable and beautiful than Indra’s heaven; and what is more, the Lord Himself decided to remain in that region as Mahabali’s guard! In the following Manvantara, the Lord promised to bestow on Mahabali the position of ‘Indra’, to be finally followed by union with Him.

In most instances a devotee surrenders to the Lord at the time of suffering after he has exhausted all other measures. But Mahabali surrendered his possessions and finally himself — to the Lord who stood apparently on his enemy’s side — even when he was at the pinnacle of glory, without any resistance. This shows that Mahabali lived a life of surrender at all times. It is no wonder then that the Lord Himself came to his doorstep to ask for alms; such was the exalted state of Mahabali’s atmanivedanam.

2 Responses to "The Magnanimous Mahabali"