This month’s quiz is based on some of the popular and traditional kolams of South India. Kolam is composed of geometric lines and shapes and is drawn on a pattern of dots. 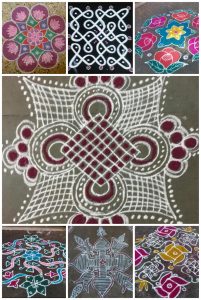 2.Kolam is an important tradition in India that symbolizes divinity and auspiciousness.When in the day are the kolam patterns generally drawn ?
a.Dawn
b.Mid-Day
c.Nighttime

5.Name the red powder that is used in kolams around the border.
a.Limestone powder
b.Kaavi (Brick Red Powder]
c.Sindoor Powder

6.Kolam was a tradition not only to symbolize divinity and auspiciousness but also
_______________.
a.To make the house look colorful
b.To bring out the beautiful intricate shapes and patterns in a kolam
c.Kolam drawn using rice flour, serve as food for ants and other insects and thus a beautiful way to welcome other beings into one’s home.