How did the Hindu religion get its Name?

A series of “Little Questions and Lucid Answers” sessions were conducted to explore the greatness and depth of Hinduism through questions posed by the children of North America to Sri Ramanujamji.

Also watch Sri Ramuji answer this question on our “I Am Awed” short video series on our Namadwaar E-Satsang YouTube channel – https://youtu.be/kUfbzq0LY5g 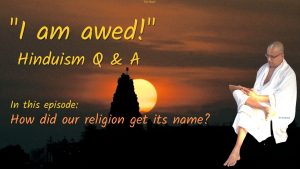 Sanatana Dharma / Hinduism – How did our religion get its name?

Our religion is called Sanathana Dharma. The term Sanathana means, “eternal and ancient”. The sacred text of our religion are the Vedas. Vedas are the intelligence of the Supreme Being Himself. A sacred text is very important for any religion because it is the source of authority or the basis on which the religion stands. We do not find a name for our religion anywhere in our sacred texts. Then why do we call our religion, “Hinduism” ?

The great saint of Kanchi, Sri Chandrashekarendra Saraswathi Swamigal (68th pontiff of Kanchi Kamakoti Mutt), explains how this name came into being.

He says, our religion initially did not have any name at all. It was the only religion that existed all over the world. However, over time, as new religions emerged, Sanatana Dharma had to be given a name to be differentiated from them. To explain this, our Mahaperiva uses a very simple yet beautiful example. In a class, if all the students have different names, then the teacher would have no need to find a way to differentiate them but if two students have the same name then the teacher has to give an adjective or some kind of identification to distinguish between the two. Likewise, when Sanathana Dharma alone existed there was no need to give it a name. It was the way of worship for the entire world, but after other religions came into being a name had to be given for our religion.

Now we know why our religion had to be given a name but why is it known as Hinduism? In the ancient past, all civilizations grew around the banks of rivers. The Western researchers tell us that our civilization that existed along the Sindhu River is the most ancient civilization. Hence we were given the name Sindhus and our country was named Sindhia. Over time Sindhia became India and Sindhus became Hindus. Therefore our religion has come to be called as Hinduism.