Navaratri – A Celebration of Divine Shaktis 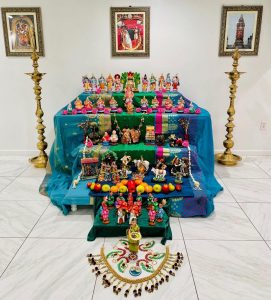 A festival is always a delightful event. Navaratri celebrations are always energetic, lively, and beautiful. This festival is celebrated on a grand scale for a period of ten days and nine nights. Hence the festival is called Navaratri.

Navaratri falls in the month of October in the Roman calendar. In the Hindu Solar calendar, it falls under the holy month of Purattasi which falls under the period called Dakshinayana. This is the period that refers to the southward movement of the sun from the Tropic of Cancer to the Tropic of Capricorn. Its equivalent counterpart is called Uttarayana which is the sun’s northward movement.

Uttarayana is equivalent to daytime in Devaloka. Consequently, Dakshinayana is said to be nighttime for the Devas.  In Devaloka, all the Devas are in yogic state during nighttime. Hence Dakshinaya is an auspicious time to start our penance or austerities.  Any tapas is initiated and fulfilled by the divine touch of a Guru. Hence, we start our devotional worship from Guru Poornima, which comes right in the beginning of Dakshinayana. Next, for the removal of all obstacles in our spiritual life, we offer our salutations to Lord Ganesha by worshipping Him during Vinayaka Chatturthi. Then comes Avani Avittam which marks the beginning of the study of Vedas. We next observe Mahalaya Amavasya to offer our obeisance to our ancestors or pithrus. Next is the festival of festivals called Navaratri in which we worship divine mother goddesses like Durga, Saraswati, and Lakshmi that represent Shakti (power). Shakti refers to the creative and feminine aspect of creation.

Lord Brahma is depicted with four faces which symbolizes Him as the originator of the four Vedas. Jnana or correct knowledge is required for creation. Sharp and keen workmanship is a pre-requisite to make this planet full of miracles. Hence, Lord Brahma’s consort (His power), Goddess Saraswati, is the possessor of knowledge, wisdom, and learning.

Goddess Saraswati appears wearing a pure white saree seated on a white lotus and holding a sparkling white maala that is untainted and pristine. It makes us understand that our divine knowledge (Rig, Yajur, Sama, and Atharva) must be pure and shine like a diamond. It is said that knowledge grows when pressure is given at the tip of the finger. Hence, she holds a veena instrument in her hand and applies pressure on the fingers while playing it. It is also said that Goddess Saraswati resides in the tongue of Lord Brahma and hence Lord Brahma feels proud holding Vagdevi, the spiritual mother, Goddess Saraswati, who is the bestower of all the auspicious things. Sri Swamiji has rendered a beautiful song on Goddess Saraswati, “Vani Namostute” where he refers to Her as, “Chaturbhuja rupini, Chaturmukha patni, Chaturveda svarupini, Chaturvarna palini.”

Just like jnAna is required for creation, ‘active shakti’ is needed for destruction. For instance, to break a mud pot or any rigid material, mere knowledge alone is not enough. Instead, action is needed. Enormous energy is necessary to destroy any evil power. As Lord Shiva is a destroyer, he has Goddess Parashakti, as His consort. The name Parashakti implies that Parashakti is the ultimate source of energy and there is nothing more powerful than Parashakti Herself. Hence to represent the philosophy of destruction, Lord Shiva always resides in the cemetery. When Goddess Shakti in the form of the destroyer, holds weapons like a sword and trident, she becomes KALi, who destroys evil forces. As energy cannot be destroyed, Goddess Shakti is inseparable from Lord Shiva’s physical body as She is His energy. She also wears a red color saree that indicates the destruction of evil.

In the same sense, to live in this world, we need shelter, wealth, food, fortune, progeny, courage, and knowledge. These essentials are deemed important in this world. These are bestowed by Ashtalakshmi known as, Adi Lakshmi, Dhanalakshmi, Dhaanya Lakshmi, Gajalakshmi, Santana Lakshmi, Dhairya Lakshmi, Vijaya Lakshmi, Vidhya Lakshmi. Collectively put together, it is known as ‘Shri’ (or ‘Thiru’ in Tamil). Lord Vishnu has placed ‘Shri’ on His chest. To spread and bring peace and harmony to the world, Goddess Lakshmi does not carry any weapons. Each day in our lives becomes a grand and a prosperous affair only when our life is graced by ‘Shri’.

The divine trinity of Lord Brahma, Vishnu and Shiva carry out their duties of creation, protection, and destruction with the help of Saraswati, Lakshmi, and Parashakti, their respective vital shaktis. Hence Navaratri specifically celebrates these divine Shaktis.

Shri Radha Rani is also one of the forms of Devi. She is the very epitome of divine love and is the icchA shakti of Bhagavan who prays to Him on behalf of all the jivas, and spurs Him to begin creation.

These nine days of Navaratri festival are dedicated exclusively to acclaim, think, cherish, and receive the blessings of Devi in different forms.

Commonly in Tamil Nadu, Navaratri celebrations are distinguished by the kolu display. Divine statues are festooned by placing and presenting it in seven steps, which indicates seven different types of births. The nine days of festival are also said to represent the nine dwaras of our body. We worship Devi, to win over the nine dwaras and get our soul liberated through the shiras (head).

Festivals are always meant to cheer our spirits with enthusiasm and enhance our journey towards divinity by thinking of and thanking Bhagavan.