This month’s quiz is based on the second Brihadeeswara temple located at Gangaikonda Cholapuram, the second of the three ‘Great Living Chola Temples’ built during the Chola dynasty era. 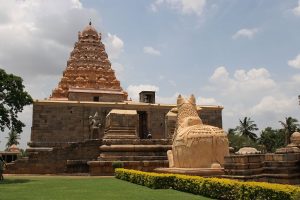 6. Name the stone that was used for building the Gangaikonda Cholapuram temple.
a.Marble
b.Granite
c.Sandstone

11. Name the well that is located in the temple premises and has a lion face guarding its steps.
a. Simhakeni
b. Ganga theertham
c. Pushkar theertham

13. A big Nandi carved out from a single limestone stands in front of the sanctum sanctorum. What is the unique architecture nuance that is seen in this Nandi?
a. The Nandi stands guard to the Shiva Linga
b. The sunlight that falls on Nandi and is, in turn, reflected on the Shiva Linga. This enables everyone to have the darshan of Shiva linga even if there is no light nearby.
c. It is the largest Nandi in the Chola temples.