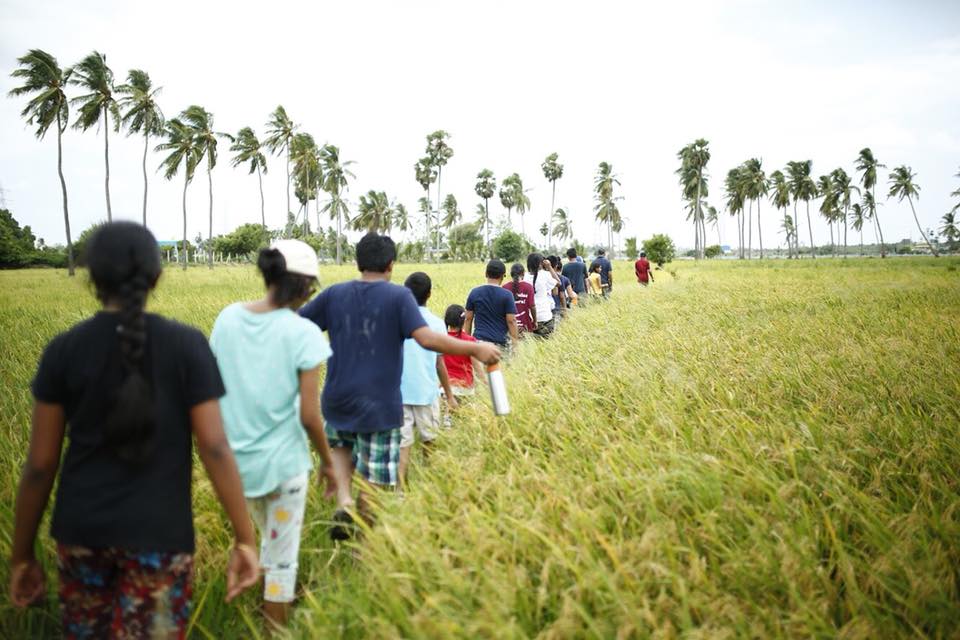 A two-day International Gopa Kuteeram camp is organized by GOD India in Chennai every year around June-July, where kids from many countries enroll and take part enthusiastically. 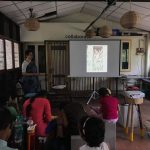 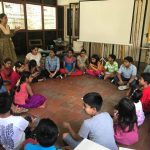 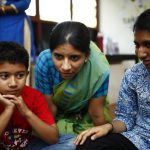 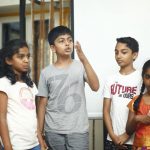 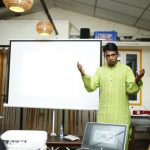 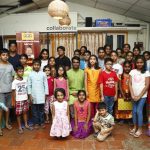 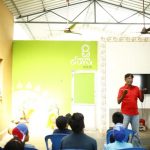 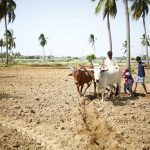 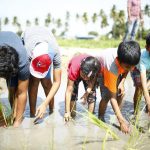 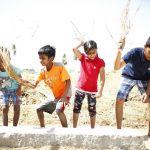 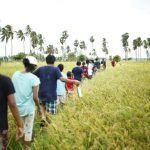 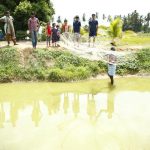 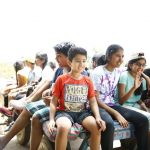 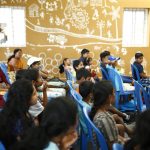 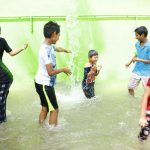 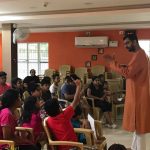 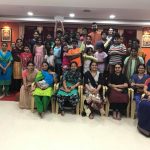 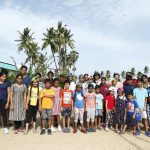 This year the 2-day camp was held on July 16 and 17, 2018. On the first day, special sessions and activities were held at a cool venue called BackYard, and on the second day, there was a fun field trip to a farm named FarmGuru on the outskirts of Chennai.

On Day 1 the first session was by an archeologist and historian, Dr. Chitra Madhavan. Her session was on Temples in Kanchipuram and was extremely interesting. We learnt about the beautiful, intricate architecture and interesting facts about 3 different temples in Kanchipuram. The first one was the Kailasa Natha temple. Around this temple’s prakaram, there are fifty-eight shrines dedicated to Lord Shiva. Each shrine has a Shiva lingam. Long ago there was a Vedic college located in the temple. The second temple was the Vaikunta Perumal temple. This temple is made from sandstone. There are three levels in this temple in which Vishnu is in different positions – sitting, lying down and standing. There are also statues of Sridevi and Bhoodevi. The last temple was the Varadaraja Perumal temple. This famous temple has age-old paintings of all the 106 divya desam temples (that are on earth) and each of these paintings is depicted exactly as how each Perumal is in that temple. Dr. Chitra explained how amazing it was that even in those earlier years, the artists had detailed info about how each Perumal looked (when even today it takes a lifetime or more to visit all the divya desams) and had painted them so intricately.

After we had learned the rich history about these three temples, we started the Storytelling session. In this session, we were split into groups of two based on our age. Then we picked a topic and we had to come up with a story. Then we had to tell the story to everyone as a team, taking turns. At the end of the story, we had to tell the audience what the moral/ theme was. After the storytelling, we had a lunch break.

Following lunch session, we learnt about traditional Indian board games and had a discussion on how board games are better than digital device games. The term ‘Indian games’ is a very broad topic. There are so many traditional Indian games, Pallanguzhi and Dayakattai to name a few. We had fifteen minutes to learn how to play the game. Then we were given time to design a game of our own and present it to the class.

The concluding session for the day was led by Bhagyaji. In this session, we learnt how science ties all towards our Vedas and Shastras. He started the session with seven questions.  Some of the questions included what is the best camera for which the answer is the eye. What is the best hard drive, answer is the brain. What is the best pump, of course, one’s heart! Have you ever noticed that in temples they dress Surya Bhagavan in white and each of his seven horses in each color of the rainbow. This is represented in science as the prismatic spectrum where the sun’s white light is refracted by a prism to produce the seven colors. This is also seen in a rainbow for example. When the sun’s rays fall on a droplet of water, the white light is absorbed and the rainbow colors are produced. Bhagyaji also expounded on one verse from Sri Swamiji’s work, Kali Dharma Undiyar, where Sri Swamiji says how just the fact that the five elements, which are naturally in opposition and antagonistic to each other, are yet under control in creation is proof that there is a power above them that controls them – the power that we call God. The first day of the camp came to an end with this.

The next day we went to FarmGuru. We went on a bus to the camp at 6 am on Tuesday. Then we started off the day by watching a video about how farming is the most important profession and that we should thank farmers for the food we eat every day. Then we went to an outdoor classroom under lovely mango trees, where we were told about the different processes in farming. Then we ourselves experienced the magic of farming. We ploughed the field with bulls, sowed paddy seeds, transplanted paddy saplings. Then we threshed the harvested paddy stalks and ground the rice, removed the husk from the rice. We also harvested some bottle gourds and got to take them home with us. Once that was done, we went for lunch on a bullock cart. Later, after lunch, we took a walk around the fields; visited the greenhouse; saw the catfish that the farmers keep in a pond as the nitrates that the catfish release into the water act as fertilizers for the growing plants. To end the wonderful visit to the farm, we splashed around and had fun playing in the water from an outdoor pump set. Then we drove back to GOD office where we had left from. There, in a nearby hall, we had a final concluding session with Sri Ramanujamji where he played a magic trick and made a point to show us how the magic begins long before the actual show. He wanted to show us that success lies in the effort we put in. But also told us how we should not wait for an achievement to be happy, but instead, we should start with being happy. That way we will also enjoy the effort and work along the way. Then finally when success comes, we will already be happy anyway. Ramuji also spoke about gratitude and about focusing on the feelings behind anger and how anger was often only a mask to hide feelings like concern.

We also shared all that we had done during the two days with our parents and Ramuji.

The two day was fun-filled learning and we truly enjoyed it. I eagerly look forward to the next year’s camp. Many thanks and Radhe Radhe to Jananiji, Sujathaji and the GOD India team for taking all steps to beautifully arrange this wonderful camp for us.