Faith and Nama – The Cure For All Our Miseries

We find people visiting temples on their birthdays and wedding anniversaries. It turns out to be a recreational activity for them. Even in the vicinity of the temple deity or while circumambulating the temple, we find that some will be preoccupied with worldly chit chat or others will close their eyes to meditate. Once I went to a hospital to visit someone. Though a hospital is not a temple, we find photos of deities hung on the walls. There I witnessed a wonderful spectacle. People stood in front of these pictures and prayed intensely with tears welling in their eyes. Should they not be praying in the temple? However, the same people who do not pray in the temple are seen crying in front of these pictures of deities. This shows that people think of God only in times of crisis. 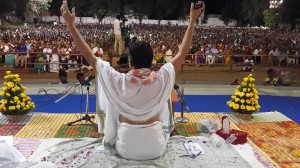 Prayer is an intense, heartfelt submission of our request to God.

In times of need, we hesitate to ask for monetary help from our siblings or a friend or a relative. However we demand it, as it is our right, from our parents without any hesitation. The underlying fact in a prayer is that we have the same rights with God. Aren’t we all the children of God? We should not feel shy or reluctant to ask God. Just as we have a privilege in seeking God’s help, the same way He has the privilege in answering our requests.

Faith is the most important requirement for prayer. The faith that we are His children and He will shower us with all we need when we pray. Questions such as ‘I know He is merciful, but will He answer my prayers?’ should be shunned away. You should have the steadfast faith that you are His child. Other questions such as ‘these bad events are due to my past karma’ or that ‘my astrological situation predicts bad times for me, will God overrule these factors and shower His mercy?’ should also be discarded. Let’s look at an incident from Mahabharata.

In the game of dice, we find Yudhishtira gambling away his money, his army, his brothers, himself and finally his wife Draupadi. When Draupadi is dragged by Dushasana into the royal court, Duryodhana decides to disrobe her in public. The misfortune of ‘public humiliation’, which is worse than death, is about to befall Draupadi. What could Draupadi have done to prevent this calamity? Can she bargain for some time to perform pranayama or to perform homa or to chant some mantras? Is the situation conducive for such a request? Or instead, Draupadi could have thought that all this is destined to happen as per her past karma or astrological signs and there is no point in calling out to God. If we develop such a thought, then our prayers will never fructify. God’s grace is beyond our karmic deeds. It has the power to overcome anything. Thoughts such as fate, karma, or questions such as ‘will this happen or not’ will weaken our faith. We should never allow such thoughts to creep into our head. Without such thoughts, Draupadi just yelled out to God and He protected her from the imminent crisis.

Those who require God’s grace are eligible for prayers. Whom can you ask if you have wants such as a child, or to get married, or to be relieved of diseases, or need unity in the family, or peace of mind, or your business to flourish? There will be people who can assist in one of your wants but not all of them. If there is one who can fulfil all your wants, it is God. So if we visit a temple and while away the time in worldly chatter instead of focusing on our prayers, how does this establish a communion with God? How can one establish a communion with God who is omnipresent? The only way is to Call or Yell out to Him.

Once, the king of Tanjore had a weird doubt. He wanted to know the distance between Earth and Vaikunta. All the learned scholars in his court could not answer him properly. Soon the news spread across the kingdom that the no one was able to answer this question. Hearing this, a bangle seller from the nearby Narasimha temple, approached the king. He told him that from Earth, Vaikunta is within ‘calling distance’. The proof is that Draupadi called out ‘Govinda’ and Gajendra called out ‘Narayana’ and this was heard in Vaikunta.

I often ask a standard question to people from different walks of life. “What will you do in times of crisis?” The common answer I receive is that they will visit an astrologer and perform the required remedial measures. There are others who blame fate for these bad times and get depressed, and finally ending up seeking medical attention. To my surprise, not one of them say that they will pray to God.

Prayer is such a beautiful thing and we have forgotten this beautiful concept. Where the prayer is intense, there God’s presence is felt.

We pray in temples since these places are brimming with God’s presence (sannidhyam). Similarly, where God is called out with a prayer, there God’s presence is established. To the question from his father whether God existed in that pillar, Prahlada did not have time to perform puja or consecration as done in the temples to invoke God in the pillar. All he had was faith that God did exist in that pillar; and that was enough. A temple built by spending millions of dollars but without faith in God, will never witness God’s presence. But where there is faith, even a stone will be transformed into God. Wherever He is called out with faith, we can feel His presence there.

Though initially we start our prayer with faith, we lose it in course of time. We should never lose hope. Do we need to spend any money to chant Nama*, or time in studying how to chant this Nama, or is there any worry that we might mispronounce the words in the Nama, or do we need someone’s assistance in chanting Nama, or do we need a secluded place or is it required to quit other tasks to perform Nama Kirtan? The answer to all these is a big NO. We can chant this Nama in any place, anytime, in any manner and without any restrictions. Since we have the path to reach God in front of us, and we have Nama on our lips, is there any reason for worry?

Prayers done with a firm resolution, one-pointed mind and steadfast faith will always be successful. At the start of this event, many shared their experiences, which goes to show the power of Nama. Many hours in a day are spent in idle chatter, why can’t some of it be spent in chanting Nama? This is a path propagated by Azhwars, Nayanmars and many saints who have graced this country.

There is a famous incident in the life of Ramakrishna Paramahamsa, where chanting the Mahamantra cured the disease of the great saint Totapuri. Nama is a blessing even for saints. Chanting Nama is a blessing for God Himself. Recently, a few villagers visited me and mentioned about the consecration of a temple in their village and how they were bereft of any money. I asked them to chant Mahamantra for 7 days continuously in the temple premises. They quipped that they did not have enough people to chant and that too for 7 consecutive days. I informed them to keep the temple open and that members from our organization will chant the Mahamantra for 7 days. On the 7th day, a family visited the village and were enquiring about the way to a temple. The curious villagers came to know that these rich folks had been recommended by their astrologer to consecrate this very temple to overcome their miseries in life. The ecstatic villagers then came to me with the invitation for the temple consecration. I went and told this temple deity that even for Him, Nama is a blessing.

God does not reside even in a temple where Nama is not chanted. God will come to the place where Nama is chanted. Else the names Rama and Krishna might refer to the names of someone else. To protect His names, He shows up. Nama will protect our minds and makes us psychologically and emotionally stronger.

Let us also pray for the people who suffered during the recent natural calamities. Some people have a habit of fear mongering and get joy by spreading fear. Many were panic stricken to hear rumors about tsunamis that might strike Tamil Nadu. Rest assured, there will be no tsunamis that will strike India for the next 100 years.

Only the ones chosen by God have assembled here for this mass prayer. All of you are blessed to be part of this mass prayer. Even the ones who are in the vicinity of this mass prayer arena will be benefited. Recently, a couple visited a doctor in Virudhunagar. The lady was expecting but the baby had turned its position inside the womb. The doctor said that a surgery had to be performed to save the baby and that it would cost Rs.10,000. The husband had to go back to his native village to procure this money. He left his wife in a nearby Rama temple and asked her to await his return. Nama sankirtan was happening in the temple then and this lady sat in a corner. When the husband came back and they visited the doctor again, it was found that surgery was not needed and the lady had a normal delivery. She did not even chant the Nama in the temple, but she was still protected.

Mahatma Gandhi used to start every session with Rama Nama chanting. No other country won independence by non-violent means. It was Rama Nama that won it for us.

A single jasmine flower emanates fragrance which reaches a small distance, but the fragrance from a bunch of jasmine flowers reaches far greater distance. Similarly, the mass chanting of Nama will surely attract God and His presence will be felt by everyone seated here. His touch will be felt by each one of you. God is waiting to shower His grace on you. Chant with faith and let God enter your heart. Faith is greater than God. Instead of focusing on worries and problems, focus your mind on Nama and you will see many wonders unfolding in your life in 2016.