God Lived with Them by Swami Chetanananda 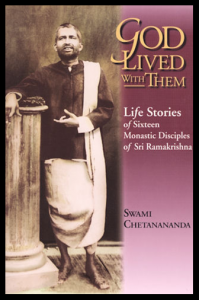 “The melting glaciers of the high Himalayas form the river Ganges, which flows thousands of miles over the plains and supplies life-saving water to millions of people. Similarly, Sri Ramakrishna, who for most of his life remained absorbed in samadhi – the acme of spiritual experience – out of compassion descended to the relative plane of human existence to alleviate human suffering. His condensed spirituality, as it were, melted and flowed through his disciples who later carried his life-giving message to the world.”

Thus begins the preface of the book God Lived with Them, written by Swami Chetanananda. This invaluable book chronicles the lives of the 16 monastic disciples of Sri Ramakrishna Paramahamsa: their early lives, how they came to Sri Ramakrishna, his influence on them, their lives after his mahasamadhi, and how they later carried on their Master’s work in the world.

It is interesting to note that in the 50 years of Sri Ramakrishna’s life on this earth—almost 30 of which were spent in Dakshineshwar near Calcutta in spiritual earnestness and ecstasy—almost all of his monastic disciples, who were to take his message to the whole world, came to him only in the final 6-7 years of his life. And also interestingly, this year (2013) marks the 150th birth anniversary of four of the sixteen disciples – Swami Vivekananda, Swami Brahmananda, Swami Ramakrishnananda and Swami Turiyananda.

Studying the lives of such great souls as these, brings in the reader an awe-filled appreciation of their service to Sri Ramakrishna and their intense faith in him; as well as an appreciation of the struggle they went through – physically, emotionally and spiritually – after his passing, both in the path of their own spiritual development and in doing his work in the world.

This book is a must-read for all spiritual aspirants, and especially for those interested in the Ramakrishna Order and Swami Vivekananda.