Everyone who has had the fortune of participating in a Radha Kalyana Mahotsavam, will surely know about Ashtapadi, which is called as Gita Govindam.

Traditionally, after singing Ashtapadi, bhagavathas will sing a kirtan that goes, “bhajata prEma krupAnidhi mAdhavam pANDavasArathi vEsham”. Every kirtan has a mudra, doesn’t it? If it is Sri Thyagaraja Swami’s kirtanam, then it will always have the mudra ‘Thyagaraja’ itself. Meera matha’s kirtans will have the mudra ‘Meera prabhu Giridhari’. Generally, if words like ‘Bhadrachala ’ or ‘Bhadragiri’ come as the mudra, then it will usually be a kirtan of Sri Bhadrachala Ramadas. In this kirtan ‘bhajata krupAnidhi mAdhavam’ that is sung after Ashtapadi also, the mudra ‘Bhadrachala Gopalam’ can be seen. But this is not a kirtan of Sri Bhadrachala Ramadasa. The mahan who graced this wonderful kirtan is Sri Gopala Bhagavathar.

There is a village called Bhagavatapuram, which is located between Tiruvisalur and Tiruvidaimarudur. This is where the mahan called Sri Gopala Bhagavathar lived. He was a disciple of Marudanallur Sadguruswamigal. Everyday, after taking his bath in the Kaveri river, he would do japa of 1,08,000 Rama Nama (latchaththu ennaayiram). Then he would take unchavritti.

Thus he lived in bhagavata dharma, and with the grace of Sri Rama, led a happy life. This mahan, who had immense enthusiasm (aarvam) for Guru seva, would also go to Marudanallur and serve Sadguruswamigal.

In this way, this mahan, who lived always as Guru seva, Rama Nama kirtanam, unchavritti, realized, on the auspicious day of Masi Makham, that he was going to breath his last. He requested the devotees who were with him to take him to the banks of the holy Kaveri river; they also did as he bid them to. On the banks of Kaveri, he did parayanam of Bhishma stuti from Srimad Bhagavatam, with tears of joy flowing from his eyes. His hair stood on end! He cried out, “Kanna! Prabho! You yourself came and gave darshan to your devotee Bhishma, during his final moments! Will you grace me also like that!” As he was crying out like this, suddenly he said, “There! There! I can see Par 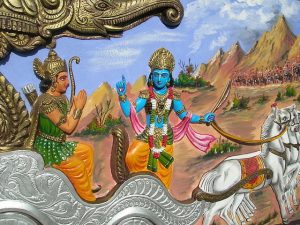 thasarathy!” Immediately, he sang an astonishing kirtan beginning with

He completed the kirtan with the mudra “Bhadrachala gopalam”. This is a wonderful kirtan that was sung while seeing Parthasarathy directly. After singing this incredible kirtan, and wearing the tambura, and with cymbals in his hands, he attained Paramapadam.