Gopashtami is the celebration of how Lord Krishna protected His beloved Gopas, Gopis, cows and calves from the wrath of proud Indra by holding the Govardhan mountain aloft for seven whole days. It is celebrated on the eighth day in the bright fortnight of the month of Karthik, which fell this year on November 19. It is the auspicious day that Lord Krishna was anointed as “Govinda”! 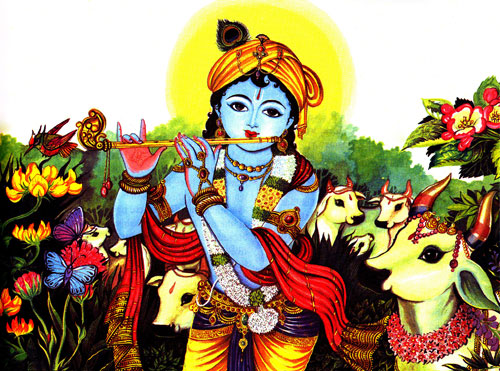 From Sri Swamiji we learn that the Govardhana episode signifies surrender – absolute surrender to the Lord, and how the Lord will do anything to protect His pure, surrendered devotees.

When Krishna told the Gopas to stop their annual worship of Indra, and they did as He said, Indra’s brought down pillars of rain and storm with intent to destroy Brindavan.

Here Sri Swamiji would say, “Not one of them, not for a moment, held even the thought – ‘Oh why did we listen to Krishna? It is because of Him that we have been pushed into this crisis!’”

Lord Krishna, moved by the love and surrender of His wonderful devotees then said, “It is My vow to protect and save these cowherds who have taken refuge in Me, looking upon Me as their Master.” Saying this, the Lord lifted Govardhana mountain on His little finger as if it were a mere mushroom!

His ego destroyed, Indra then came and fell at Krishna’s feet, sought His pardon and with folded palms sang His praises. It was then that Krishna was anointed as “Govinda” – the savior of the cows, the Gopas, the world!

Sri Swamiji always speaks of the glory of ‘Govinda’ Nama!  In ‘Govindashtakam’,  Sri Adi Shankara extolls . In this Govindashtakam, Shankara speaks exclusively of the glory of the Nama Govinda! ’Worship Govinda who is Supreme Bliss, Truth, Knowledge, Infinite and Eternal; who is free from bondages; who is the highest light; who was eager as a child to crawl in the cow-pen; who is truly free from hardships, but who appears to be in difficulties; who appears many due to Maya; who appears as the world; who is the Lord of the earth; and who has no Master to control Him.

Sri Bodendra Swami writes in Bhagavan Nama Rasodayam that in this Kali yuga that is wrought with confusion, misery and sin, singing the name of Govinda is only the solution for all!

Skandha Puranam also says, ’If you hear anyone utter ‘Govinda!’, smear his tongue with honey!’

Bhadrachala Ramadas, an ardent Rama devotee has sung umpteen kirtans having ‘Govinda’ Nama, which are sung during Divya Nama Sankirtan.

Thondaripodi Azhwar, who sang the beautiful Tirumalai, shows the greatness of Govinda Nama. Once there lived a king who had committed many sinful acts. He was equal to a hundred Ajamilas! In the case of Ajamila, people would at least refer to him by name. But people dreaded even to utter this king’s name. Such was his character. He, therefore, earned the name ‘Kshatrabandhu’.

Chased away by his people, this king moved into the forest. As he wandered in the forest, he came across a Mahatma. Due to the Mahatma’s divine presence, this sinful king began to repent his sinful life, and wished to atone for it. So he went up to the Mahatma and confessed all his sins. Listening to it the Mahatma felt shaken.

Uttering Govinda! Govinda! Govinda! all at once, cleanses pollution. In satsangs while serving food they would say, “Everyone please utter Govinda! Govinda! while eating.” This is because it is said that in our shastras that one who eats every mouth uttering ‘Govinda’ is a nitya upavaasi! It is akin to fasting.

There are 30 paasurams in Tiruppavai. In the 30 paasurams, Andal uses the twelve Names of Kesava, Narayana, Madhava, Govinda, Krishna, Madhusudana, Trivikrama, Vamana, Sridhara, Hrishikesha, Padmanabha, Damodara.  Of these, she uses 11 names only once but the Name ‘Govinda’ she uses thrice. Verily the glory of the Nama Govinda!

Sri Swamiji would say we could go on and on about the glory of the name Govinda! It is indeed a special Divine Name of the Lord.

Excerpted from the discourses of HH Sri Sri Muralidhara Swamiji