Sri Swamiji’s address at an Interfaith Meet in Chennai 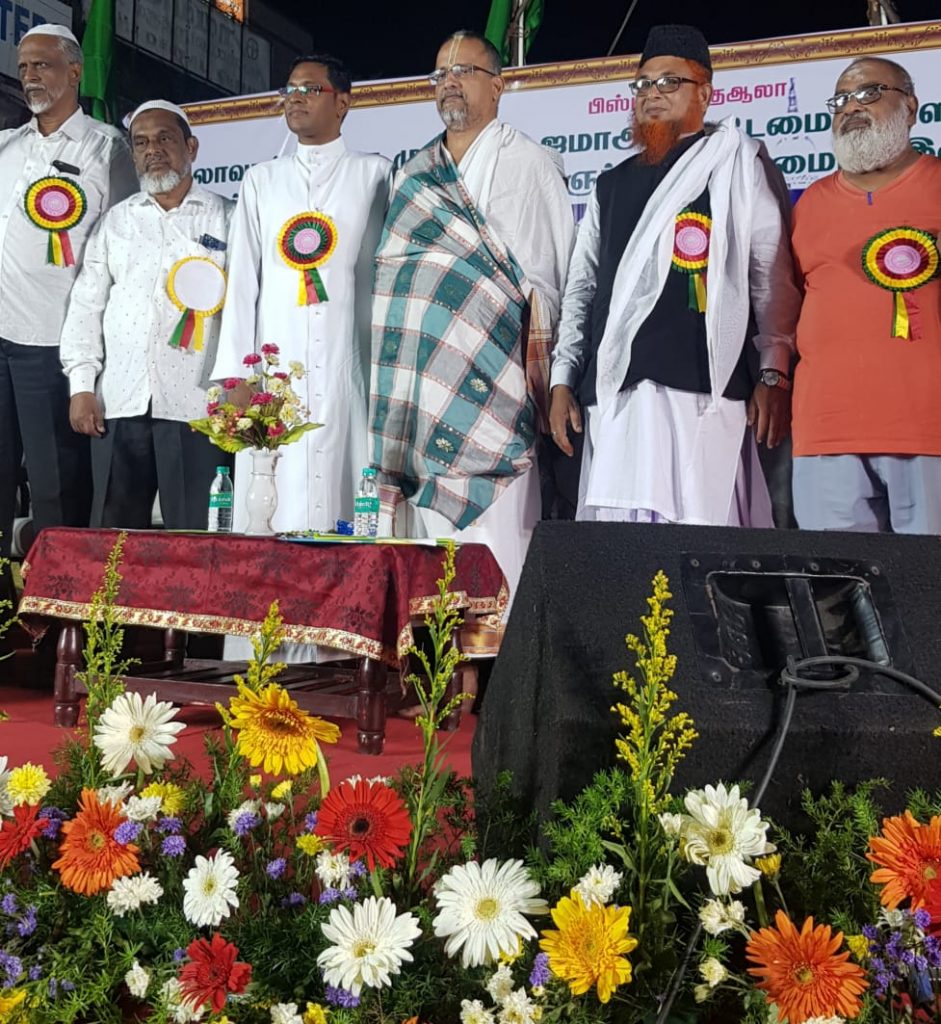 Maharanyam Sri Sri Muralidhara Swamiji was invited to be the guest of honor at an Interfaith harmony meet organized by Muhalla Jamaat Association, Valarpirai Charity Organization and Association of Islamic Youth in Chennai, India, on Nov 22, 2019. This is a translation of his address (which was originally in Tamil).

One need not look at a book for proof about the existence of God. One look at this huge universe is simply the testimony to the existence of God. Just take a look at the sky. How many stars! How many planets! Scientists have not yet discovered all of them. These countless stars and planets stand in space without any support. Since its creation this earth has been in its orbit without moving away. If it happened to move down a little, we would all be frozen; and if it happened to move up a little we would be burnt down. The whole cosmos including all the planets, stars and this earth are operating in their respective places.

A decade or so ago there was a tsunami here in India and everywhere, everyone spoke only about the tsunami. There was even a debate over its re-occurrence. For how long did this tsunami last? Just a minute or two. If the ocean rises for just a minute or two, we are unable to bear it. While this is so, how is it that the ocean continues to stay within its boundaries since Earth came into existence? When it does cross its boundaries, we are unable to face it. We think about it and debate over it. But who has kept it under control?

An earthquake for even a fraction of a moment brings about great destruction.
God has created this world with the five elements – earth, water, fire, air, space – that are antagonistic to each other by nature. Yet they have remained in balance and the world has survived. God has not only created this world but is also administering it, till date. It is only due to His care that we find orderliness in the cosmos, to this day.

When we look at this creation, we are able to understand one thing clearly.

We say that the population of India is 130 crores or 140 crores; then imagine the world population! In this countless number of people, is one person like another? There is difference in everyone’s physical features, gait, etc. Likewise, there is variety in everything – in fruits, flowers and in everything else. From this we are able to comprehend that God has created this world with great taste, exquisitely, with a touch of variety. It is only because of this that we do not feel tired of this world.

Just imagine if all people looked exactly the same, with the same countenance, gait, etc. What boredom it would be! Just as God has created this world with variety in each and everything, so too, God has created various paths to attain Him depending on the Age (Time) and on the people.

Sri Ramakrishna Paramahamsa would say ‘as many paths as there are people.’ God has created various ways to attain Him depending on the Age, the need, the circumstances, the people, the community, the lifestyle pertaining to that Age, etc.

‘Matham’ (மதம், मतं, religion). Today people hesitate even to utter the term ‘matham’. However the word ‘matham’ is a wonderful one. That which has been researched, accepted and adopted by those with a discerning mathi (mind), the wise, is called ‘matham’ (dharma).

This world contains variety in everything. Is it possible to change them all? Can all humans be made to be of the same height, weight, color, language, culture? Well, even if this was done, would it be a good thing?

The wonder, the variety we find in humans, in the world can never be changed. We can never bring about uniformity in anything. It is not possible. However, we can bring about Unity!

Let there not be Uniformity! But we can be United.

‘All of us are the children of One God’ – if this can be realized, unity will certainly come about. We are all brothers and sisters. Haven’t we all been created by one God?
If there were more than one God we will have to find out who holds the highest office for that particular time and Age, etc. Does that even make sense? Would a quarrel not ensue between them for occupying the highest office?

There are no different Gods based on the country, language, etc. There is only one God!

If we hold the steadfast thought that all of us are the children of that One God, we will never feel hatred towards anyone. Let us first learn to accept humans as humans.