This month’s quiz is based on Mahabalipuram , a world heritage site which is very famous for ancient monuments and temples located near Chennai in Tamil Nadu, India. 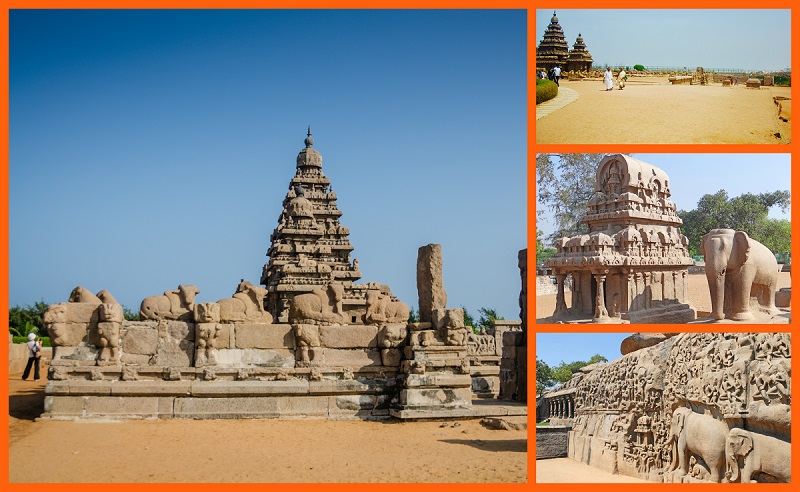 1. On which coast is Mahabalipuram located?
a. Coromandel Coast
b. Konkan Coast
c. Malabar Coast

2. How many monuments are there in Mahabalipuram?
a. Thirty-five
b. Four hundred
c. One hundred

3. What is the other name for Mahabalipuram?
a. Mamallapuram
b. Malleshwaram
c. Malabar

4. Which prominent empire/dynasty constructed the ancient monuments and temples
in Mahabalipuram?
a. Chozha dynasty
b. Pallava dynasty
c. Hoysala dynasty

5. How many types of monuments are present in Mahabalipuram?
a. Four
b. Ten
c. Twelve

6. Name the king who built the ancient monuments and temples in Mahabalipuram.
a. Vishwamitra Verman
b. Krishna Deva Raya
c. Narasimma Varman

7. What is the name of the five temples that are carved out from a single rock in the
shape of a chariot?
a. Pancha Rathas
b. Pandava Rathas
c. Pallava Rathas

8. Name the structural temple overlooking the sea that was built by the Pallava
kings. This temple is a classic monument that depicts the artistic skills of the
Pandavas.
a. Sun Temple
b. Kailasha Temple
c. Shore Temple

9. What does the term ‘Mammalla’ refer to?
a. Great Wrestler
b. Great Sculptor
c. Great King

10. Which is one of the oldest temples in South India and also an introduction to
structural temples constructed by Pallava dynasty?
a. Shore temple
b. Krishna temple
c. Sun temple

12. How are the cave temples generally referred to?
a. Mandapas
b. Rathas
c. Chakras

13. Name the monument that is a huge boulder on a slope with only the tip of the boulder
touching the ground.
a. Krishna’s butter ball
b. Olakaneshwara temple
c. Shore temple

14. Name the temple that is built on top of a cave temple,
a. Shore temple
b. Olakkaneshwara temple
c. Krishna temple