Krishna, in His time on earth, performed many leelas, the most distinct one being the Damodara leela, an incident that happened in Vrindavan when Krishna was a toddler.

As the little boy was beginning to walk and run, it became a common occurrence for him to steal the butter. The gopis would complain to Yashoda and feign anger, but they would always watch and enjoy Krishna’s divine play!

One particular day, Mother Yashoda began to churn large pots of buttermilk early in the morning. As she toiled, immersed in her chores, Krishna woke up with a burning hunger in his belly and started crying. Heeding to the cries, Yashoda picked up the stormy-hued child to feed him. Suddenly, she realized that was boiling over in the kitchen! Putting little Krishna down,  she hurriedly ran to tend to the milk.

Little Krishna did not take this dismissal well. Gnashing his little pearly teeth and curling his ruby lips, Krishna grabbed the largest pebble he could find. With one eye squinted, and an arm outstretched to get the perfect aim, her drew back the pebble, and- CRASH!- broke open a large pot of butter! He ate what he could, gave some to the hooting monkeys and ran away. Mother Yashoda, hearing the crash, came out to see puddles of butte 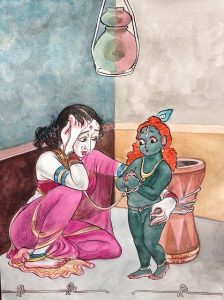 rmilk everywhere. A large pot broken, creamy butter painting the walls and floor, and to top it all off, a pair of tiny feet scurrying away. Her heart melted, but she decided that she must discipline Krishna. She took a long stick, and followed the buttery footsteps to a room. Quietly pushing open the door, she placed a foot delicately into the room. As soon as she entered, Krishna jumped out from behind the door and ran out! Mother Yashoda struggled to keep up with Krishna, who was running as fast as his pudgy little legs could carry him.

After much difficulty, Krishna allowed himself to be caught, and Mother Yashoda sat down, chest heaving, out of breath. Then she asked, “Krishna, did you break the pot and take butter out?”

“Well then what happened to the pot? And why is there butter all over the ground?”

“Well, after you put me down, a few monkeys- very naughty monkeys, Ma- came and tried to steal the butter. When I told them they couldn’t, they got mad at me and jumped towards the butter and I threw a little rock at them. Bad luck, I missed and it hit the pot instead, so the monkeys took the butter and ran. I was running to catch them and they ran in that room- and escaped through a hole in the roof.”

Mother Yashoda listened and said, “Krishna, there is no hole in the roof in that room.”

Krishna replied, “Yes mother, I know, I just fixed it so monkeys won’t escape through there again.”

Then, Mother Yashoda asked, “Well then why were you running away from me?”

Krishna chuckled, shaking his head, “Mother, if an angry lady was chasing you with a stick, wouldn’t you run away from her too?”

Surprised at the young child’s wit, she dragged him to the nearest mortar. She got rope to tie him up. When she tried to tie it around Krishna, the rope was just 2 inches too short. She thought, He must have stolen some extra butter this month. She got more rope, only to find it too short each time. As she continuously borrowed rope from neighbors, she still found it too short. She finally gave up and sat down, exhausted. Krishna gave her the two ends of the rope and looked at her, smiling with a little sparkle in his eye. Mother Yashoda tied the rope, too tired to even worry about how it worked now. She then disappeared into the home.

Now, Krishna was bored, since there isn’t much to do when you’re tied to a large stone. ‘I will get away from the mortar’, he thought, and found the perfect way out.  He would just crawl  to his backyard between the two tall Arjuna trees that are close together and then the rope will break. After much hard work and toil, Krishna made his way in between the trees. The mortar did not fit through, so He pulled once, twice, and the third time, the trees came crashing down with a thunderous noise.  Two heavenly figures emerged.  One said, “I am Manigreeva and this is my brother Nala Kubera. We are the sons of Kubera. Once, having disrespected Narada , we were cursed by him to come down to Earth and be born as trees. We realized our mistake and pleaded to Narada who said he cannot take the curse back, but he added that we will be born in Gokula and will be released from the curse by You, the Supreme!  With your permission, we will return to our home. Please bless us that we should always do Bhakti to you” Krishna blessed them and they became little streams of light that floated back into the clear, blue sky.

Witnessing this divine incident Mother Yashoda wondered who her baby really was! But the tiny Lord willed her to forget it all. Meanwhile, Nandababa hurried and picked him up. They turned back and entered home thanking God for saving the baby against whatever demon knocked over the trees and tried to take him away!

8 Responses to "Little Krishna Gets Bound!"